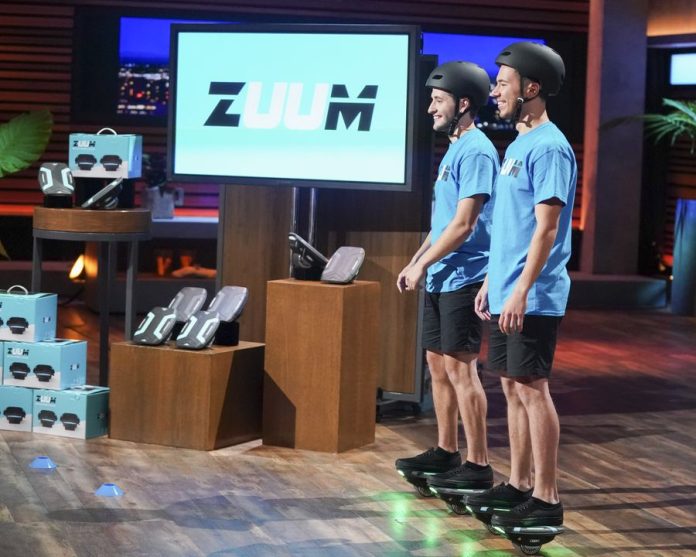 What Are Zuum Shoes, Exactly?

ZÜUM Shoes are self-balancing electronic skates that provide all of the benefits of roller skates without the need to balance them.
The product was created by two long-time friends who joined partners and began their business in their garage before pitching it to Shark Tank.
The 25.9-volt battery powers the ZUUM Hover Shoes, which are made of quality aluminium alloy.

Update on The Zuum Shark Tank: They are V-0 flame retardant, self-balancing, and feature solid rubber wheels that allow for speeds of up to 8 mph. The battery lasts around 1.5 hours and takes two hours to recharge. Four prototypes were used to confirm that the shoes are totally fire, water, and dirt resistant.

They’ve also been tested against high-impact concrete smashes, include anti-skid technology, and are controlled on a 10° inclination.

The sneakers are light enough to carry on your own or in a bag. In terms of mobility, ZUUM Hover Shoes are hoverboards, however, they move more like skateboards than a normal one-piece hoverboard.

Who Is the Zuum Shoes Founder?

Zuum Shoes was founded by Chico Guerra and Mason Buechler.

Chico Guerra and Mason Buechler were neighbours growing up five homes apart. They experimented with lemonade stands and candy sales in their area as children because they were interested in starting their own businesses. Their passion for business drove them to join in several brainstorming sessions after graduation.

After mulling over and dismissing many ideas, the two travelled to China to lay the groundwork for what would become Zuum Technologies. They acquired the first version of the product from a manufacturer while still in China.

They now have a top-of-the-line product as a consequence of gathering feedback and making considerable changes to the initial concept. They developed a product and launched it on Kickstarter a few months later, which led to their debut on Shark Tank.

The sneakers come in only one style and are now on sale on Amazon. The dedication to environmental sustainability is what actually sets these skate sneakers apart.

The shoes emit no pollutants and help you escape traffic bottlenecks.
They allow you to go at an average speed of 8 miles per hour (about the same as jogging) without having to worry about balancing the skates.

Chico and Mason were on Shark Tank in search of a $125,000 investment in Zumm Shoes in exchange for a 20% interest.

They tell the Sharks after a brief presentation that they will be distributing and branding the shoes themselves. They want the money from the Sharks to help them have enough merchandise on hand.

Sharks are afraid that the guys will be unable to articulate their key business issues. There is also criticism that they are not enthusiastic enough. The main critique, as I expected, was that the product was not proprietary.

Individuals and corporations can both import and brand these shoes. With three strikes against them, the Sharks send these individuals packing.

Update on The Shark Tank:

As a result, Zuum Shoes exited the Shark Tank without obtaining a deal.

After Shark Tank, What Happened to Zuum Shoes?

Two months after the initial air date, Zuum Shoes is still in business, and the shoes are still available on Amazon.

As of February 2022, Zuum SHoes looks to have failed to establish a viable brand.

Update on the Zuum Shark Tank:

Similar shoes may still be found on Amazon, but they are not Zuum. The website has since been taken down, and you will no longer be able to purchase shoes through it.

Are Zuum Shoes Still in Operation?

Zuum Shoes is still in operation and doing well in 2022.