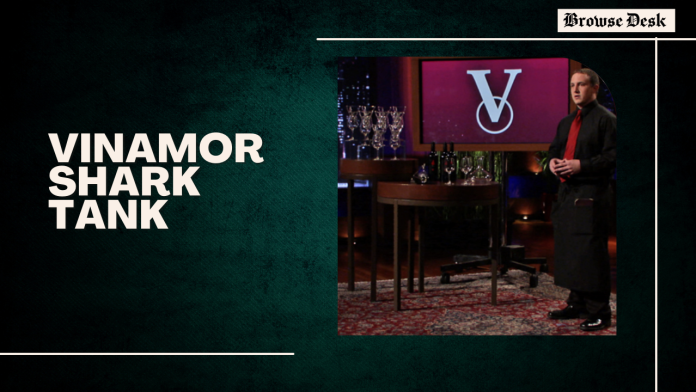 The Vinamor wine aerator device, which allows a glass of wine to be properly aerated in a matter of seconds, was created by Gary DeJohn. Your wine will breathe much more quickly than with standard aerators if you pour it into the Vinamor and set it on top of your wine glass. DeJohn entered the Shark Tank with an innovation he was confident would appeal to at least one shark, particularly Kevin O’Leary, a wine expert who even has his own winery in Canada.

Contents
1. Vinamor Wine at Shark Tank Pitch?
2. The Vinamor Aerator After the Shark Tank Update:
3. What Do the Investors on Shark Tank Think of Vinamor?
4. After Shark Tank, Vinamor:

Gary began by requesting $75k for the wine aerator company in exchange for 30% of the ownership in his presentation. He asks O’Leary to come up and taste test the same wine, but one that was poured with a Viamor, to show how quickly his aerator works. As he makes his way back to the Shark Tank, Kevin checks that it does, in fact, work and chooses to keep his sample of wine.

The ability to pour perfect portions every time makes the Vinamor pay for itself quickly, which is another cool built-in feature that would appeal to any Bar, Nightclub, or Winery that sells wine.

When this invention was created to address a need for a better wine aerator, Gary had already sold roughly 1000 Vinamors directly to customers at the restaurant where he works. The majority of his wine customers end up buying one to take home for $40. At that time, a Vinamor costs DeJohn $20 to create.

That’s simply too much for this product, according to our knowledgeable shark Kevin O’Leary who enjoys fine wine. DeJohn concurs, and for that reason, he requires this expenditure in order to locate a less expensive manufacturer elsewhere. As great as this concept is for the wine industry, the Sharks all seemed to disappear rather quickly, leaving only O’Leary.

He praised DeJohn’s invention and the ground-breaking method that combined an aerator with a mechanism to actually measure the quantity, but he ultimately realized that he was already in the aerator industry and left.

Gary, who I don’t blame for not wanting to take no for an answer, gives Kevin O’Leary one last chance by offering him 45 percent of the company. However, O’Leary had already made up his mind and rejects Gary’s new proposal.

The Vinamor Aerator After the Shark Tank Update:

Although Gary may not have struck a deal with the sharks, the Shark Tank Effect generated thousands of new orders from all around the world, so it had minimal effect on Vinamor’s success. Other investors flooded his phone with calls, all vying for a piece of the wine aerator business.

According to what I could discover, DeJohn continues to own the company outright and might not currently be looking for angel investors. DeJohn was able to cut his costs and secure a better manufacturing arrangement for the Vinamor, which is currently available online for just $24.95 at retail.

After the show, it was interestingly revealed that Gary had sold the majority of the Vinamors to the producers and a few Sharks, including Kevin O’Leary. I suppose Kevin now truly owns them all.

What Do the Investors on Shark Tank Think of Vinamor?

Mark Cuban doesn’t drink wine; he prefers lager. Any bottle that costs more than $5 doesn’t have his faith. He has left. Daymond John is completely ignorant of the market. He has left.

According to Kevin O’Leary, licensing is the only way for this to succeed. Only the capacity to gauge the pour is special, and even that is only a minor portion. Gary makes a 45 percent offer, but Kevin must choose his battles and declines.

He claims to have invented the wine in response to Barbara Corcoran’s query. How much wine knowledge and care I possess, according to Robert Herjavec, would fit in one of those cups. He has left. Robert replied by saying that he admires Gary for working hard. He simply lacks market knowledge.

Vinamor is still available from Gary through his website for $24.95, plus delivery. I checked in with Gary to see how he was doing and will soon give you an update on his situation.