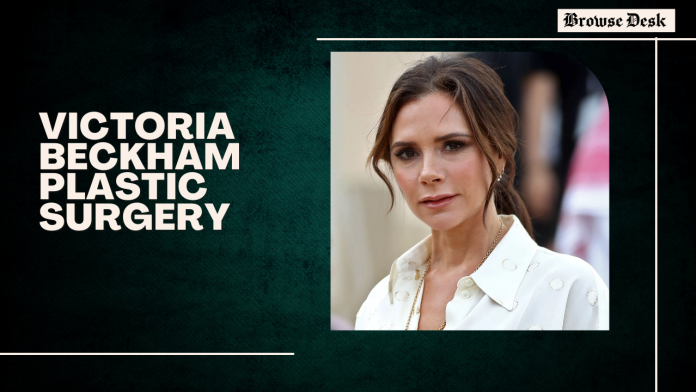 Victoria Beckham described her earlier difficulties with self-esteem in a heartfelt letter to her younger self.

She earned a reputation as a poised, accomplished woman with tremendous class, attitude, and sophistication during her exuberant breakout with the Spice Girls. But even after over 25 years, she still sets higher standards. She seemed to have it all from the outside looking in, including a charming family of four, a glittering fashion company, a stunning husband, and an unrivalled musical heritage.

There are, however, many flaws and vulnerabilities hidden beneath the success. Posh Spice didn’t hold back when writing a letter to her younger self for Vogue, discussing the complexity of her appearance and how she still has trouble embracing self-love.

You may argue that someone like Victoria can accept themselves with ease, but her admission of having plastic surgery and subsequent sorrow shows that nothing is ever as straightforward as it first appears.

Victoria regrets obtaining a plastic surgery procedure and not “embracing her faults.”
Victoria wasn’t always the epitome of English luxury, gentility, and vintage glitz. She had once been immature and young, unsure of where she fits in and how she would approach the opportunities that lay before her. Young Vic is described as “not the prettiest, or the thinnest, or the finest at dancing at the Laine Theatre Arts college” in the Vogue letter she sent to her 18-year-old self.

Her parents arranged for her to attend a performing arts boarding school in Surrey because she had shown a deep interest in dancing at a young age. She regrettably came to the realisation at her very competitive school that she wasn’t as talented or exceptional as she’d been made out to be.

Victoria found herself sluggishly residing in the centre of the pack in a competitive environment with ambitious and hardworking peers. Her dad urged her to keep her head high and keep working hard, but she begged to go home, saying she wasn’t “good enough” to keep up. “ Dad picked up the phone and said, “Stay there, show them all wrong.”

Don’t meddle with your boobs, I should probably add. I was stupid for denying it all those years. a warning of unease. Just enjoy what you have.

She felt inadequate in every manner, including having “terrible acne” and being “too overweight.” She was regularly tormented by her peers, who threw damp tissues and empty Coke cans at her since she didn’t wear the sexiest clothing. Victoria was only able to develop a thick skin and withstand the scrutiny that would come into her life in a matter of years because of these traumatic events.

Adult Victoria tells her younger self to “embrace your perfections” and stop focusing on her beauty all the time. The perm will go away, the complexion will “sort itself out,” and your weight will stabilise rather than fluctuate. There is no reason to follow the most recent diet fad, whether it involves consuming green juice or “Super Noodles.” Instead, 18-year-old Victoria should be more secure in her inherent beauty and her ability to shine regardless of how she manages to look on any given day; let her skin breathe, and use less makeup.

At that point, Victoria admits that a rumour about her having plastic surgery is true despite her years of denial.

She hasn’t felt well and “comfortable in her own flesh” for a very long time.
Like everyone else, Victoria hasn’t always had an easy time developing inner strength, particularly when it comes to issues with earthly vanities.

But what makes her position different is that she is essentially regarded as the height of poshness and perfection. She is purposefully positioned by the audience as the flawless standard to which they can aspire. She consequently needs to deal with the added stress of creating the standard, starting the trend, and laying the groundwork for others who want to follow in her footsteps.

Related: Did Lily-Rose Depp Have a Plastic Surgery?- Check Here Her Latest Pictures After Surgery

Victoria has no qualms about giving fashion advice, such as, “wear sunglasses a lot”; they “transform a nothing-outfit into something rather pulled together and fashionable,” but she doesn’t want to cause a flurry of fear, self-consciousness, or timidity in young ladies. She is all too familiar with the turmoil of fearful, self-hating emotions and the feeling that you are failing in every way.

I grin when I consider my flaws and shortcomings because they make me who I am, and I won’t strive to change that. It’s taken me a very, very long time to realise that, at 45 years old, I’m actually fine.

What the general public may not be aware of is how Victoria’s self-described “Posh Spice” persona was a marketing gimmick and not an honest reflection of her personal style or manners. She was known for being quiet, favouring fancy clothing, and wearing “high-heeled footwear,” hence the name. In the 25 years since the Spice Girl explosion, everyone has acquired the ability to adapt those traits, therefore it’s bad that they are solely associated with the wealthy and upper class. Being Posh helped her establish her style, confidence, and voice because she was young and bashful, she told ET.

If assuming a more respectable, “posh” identity gives you the confidence to stand tall with pride, then so be it. It won’t necessarily fix your problems with self-worth and caution, though. Victoria struggled for a very long time before accepting her natural face, body, and appearance. She immediately responds to Harper’s Bazaar, “No, without a doubt,” stating that she still does not view herself as beautiful. However, I do my best with what I have.

Plastic surgery or other permanent cosmetic procedures are only a bandage for your problems, not a long-term fix. That’s not to argue that these practices shouldn’t be taken into account at all, especially when taking into account medical issues, but that there is more to life than achieving these high standards of beauty. Over the years, Victoria came to the realisation that her family and job come before her vanity and style, and that she is far more satisfied to be giving attention to other areas.

Self-Acceptance Is a Difficult Battle to Win:

The most important lesson from her development over the past 25 years is that you can’t afford to pick at the most ridiculous things. It’s a common, unavoidable tendency, but as you grow older and learn amazing, frequently contradictory things about yourself, it’s best to just let the fears go and start accepting who you are. The former Spice Girl remarked, “You learn how to be comfortable in your own skin as you get older.”