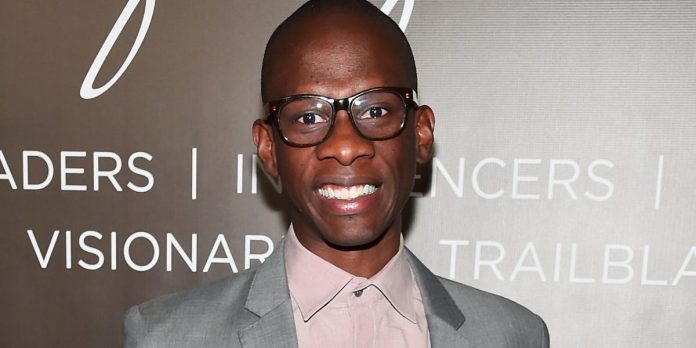 Troy Carter (November 14, 1972) is an American music manager and the co-founder and CEO of Q&A, a music and technology firm. He was previously Chairman and CEO of Atom Factory, a talent management and full-service film and television production firm. He was also the head of Spotify’s worldwide creative services. Troy Carter, a highly successful music manager, and tech investor appears as a guest Shark on ABC’s Shark Tank this week, and it doesn’t take him long to show he’s got some bite.

Troy Carter first turned down being a judge on 'Shark Tank.' Here's what changed his mind http://t.co/SdCEc2fbNO pic.twitter.com/mmLmCUUDpZ

Carter questions Wayne Johnson, the proprietor of ValPark, a “mobile parking solution” software that allows you to pay for valet parking in advance, in the exclusive sneak peek above. “I invested in Uber in 2011, when it was only in San Francisco,” Carter says, before warning Johnson that he’ll be up against the stiff competition: “There’s another kid in a garage right now who wants to eat your lunch.”

Carter was recently contacted by Yahoo TV to discuss his time on Shark Tank. Carter, who describes himself as a “big fan of the program,” claims he had no prior business contacts with any of the other Sharks before going onto the set, but “they all embraced me with open arms, and I kind of felt like I was family.” “Once those cameras are on, the Sharks come out,” he recalls, adding that the family vibe swiftly faded as the offers started flooding in.

“As an entrepreneur and an investor, once I realized I was investing my own money, my instincts went off,” Carter says of Shark Tank. You just get into bargaining mode on your own.” He doesn’t want to reveal too much, but it appears like he has made a deal or two: “Right now, I’m doing due diligence on a couple of firms.”

Carter has worked in the background for most of his career. Through his management company Atom Factory, he has worked with artists such as John Legend, Meghan Trainor, and Lady Gaga.

As an entrance into Silicon Valley in 2011, a buddy connected him to Palantir co-founder Joe Lonsdale. Bill Maris, the creator of Google Ventures, quickly became Carter’s mentor in the world of investment.

Carter is the founder of SMASHED, a business accelerator, and has made shrewd early-stage investments in firms such as Lyft, Warby Parker, and Wish.

Despite his expertise, Carter said to Business Insider that he had second thoughts about appearing on “Shark Tank” because, as a viewer of the show, he was aware of each of the Sharks’ distinct aggressive approaches and worried if he’d feel at ease in that environment.

He was astonished in a good way. He described the Sharks off-camera as “very lovely little guppies.” “They certainly weren’t sharks!”

Mark Cuban’s demeanor, Carter says, startled him the most. Despite his proclivity for being pushy when it comes to closing transactions, Carter found him to be the most welcoming and pleasant onset, making him feel at ease.

Carter met investor Lori Greiner at a Martha’s Vineyard restaurant following the filming. They got along despite the fact that she was a formidable competitor in the Tank. Carter claims that they’ve become excellent buddies.

The experience on “Shark Tank” served as a reminder that every successful investor has two sides to their story. “You have to be sympathetic, you have to be open-minded, and you do have to be a bit of a people person as well,” Carter said, adding that while you must be realistic, frank, and competitive.

Read More: Phoozy from Shark Tank has been updated: Its Really Value, Revenue, And Breakdown

Troy Carter’s net worth is predicted to be more than $70 million as of May 2022. He made his riches through dabbling in a variety of industries. He has also worked as a manager for a number of well-known celebrities in the entertainment sector. He is also a member of the ‘State’ website’s board of advisers.’

Troy Carter is regarded as one of the most well-known music managers on the planet. He has worked with a variety of personalities, including singers and actors. By founding Coalition Media Group and Atom Factory, he was able to achieve tremendous success. In 2015, he also featured on the reality television show ‘Shark Tank.’ He collaborated with Lady Gaga, who was then a “nobody.” Troy Carter has become well-known in the entertainment world as a social and digital entrepreneur.