What Exactly Is Baby Toon?

Baby Toon is a teething toy for infants and toddlers made of soft silicone. Baby Toon was created by Cassidy Crowley, 12, and her mother Lori Crowley of Honolulu, Hawaii. The Baby Toon is a brand that was born from pure love. The phrase “necessity is the mother of invention” has had an important role in the development of Baby Toon.

The Baby Toon is dedicated to providing a feeding and teething solution for babies all around the country. Silicone is not only safe for babies, but it is also environmentally friendly.

Who Are the Brains Behind Baby Toon?

Baby Toon was founded by Cassidy Crowley, a 12-year-old from Honolulu, Hawaii. Cassidy invented the Baby Toon when he was seven years old. She took part in the Honolulu District Science and Engineering Fair, where she had to identify and solve a problem.

Cassidy realized her predicament when she arrived home later that day. Cassidy’s mother was terrified every time her baby sister put a large, hard spoon in her mouth. Because she was concerned about his sister choking, she pondered inventing a soft spoon. Her creativity also helped her mum relax! She called her soft spoon “The Baby Toon.”

FDA-approved soft silicone is used to make the spoon. The soft material is soothing on the gums, and the tiny neck limits how far it may go into a baby’s mouth. It can also be used as a teething toy. She received a lot of favorable comments when she displayed her product at the Fair, and the attendees and lecturers pushed her to improve and commercialize her concept.

Cassidy wanted to make her product in the United States, but there were no suitable molding facilities in Hawaii, so she engaged Albany, New York-based Extreme Molding. Extreme Molding has a cutting-edge factory that produces silicon molded products in compliance with FDA guidelines. They make a range of baby things as well as other silicon items.

Cassidy plans to manufacture her product in the United States in the future, and she plans to donate (at least) $1000 of her profits to the Kapi’olani Medical Center, where she was born.

What Happened to Baby Toon During His Shark Tank Presentation?

In Shark Tank episode 1 of season 11, Cassidy Crowley and her mother, Lori, present The Baby Toon, a soft spoon for babies and toddlers. Cassidy and Lori offer $50,000 in exchange for a 50% stake in the firm, which is worth $100,000. Although Lori is present to support her daughter, Cassidy steals the stage and immediately impresses the Sharks.

She articulately recounts her story and the process of creating the product. Her knowledge of silicon and the patents for her gadget also impress the Sharks. As the camera glides across their faces during her speech, the Sharks’ emotions are plainly in awe of her intelligence and sales prowess.

Lori seizes the opportunity and provides Cassidy $50,000 in exchange for 50% stock shares, just what she requested! They accept the proposition and sign the contract. Because she claims to be a Shark, Kevin lets her sit in his chair after the pitch.

After Shark Tank, What Happened to Baby Toon? 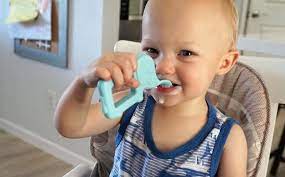 The transaction was completed with Lori when Cassidy and her mother left the pitch with an agreement, and this show was rerun just three months later. “This great enterprise was founded by a brilliant and excellent 10-year-old kid!” Lori writes on her website to advertise the goods.

The Baby Toon is the best-patented baby spoon on the market! This ergonomically designed soft spoon, manufactured of FDA-approved silicone, eliminates harsh angles and ends, making feeding safer and easier for babies.”

The company was included in the “baby Sharks” segment of The Shark Tank Greatest of All Time Special in February 2020. A producer compliments her on her performance in the Kevin segment. The firm will have an update section in episode 1213, in which they will announce a licensing partnership with the newborn brand Munchkin.

In the update, Lori mentions that this licensing arrangement will last Cassidy and her family a long time. Munchkin’s contract was signed in November 2021.

Indirect rivals include Ooga, which offers a silicone baby spoon with a train on top, and Ningbo Easyget Co., which sells a baby silicone spoon fashioned like a human body.

The firm was valued at $100,000 before and after the pitch, and since then, it has been selling its product, thus its net worth may have improved.