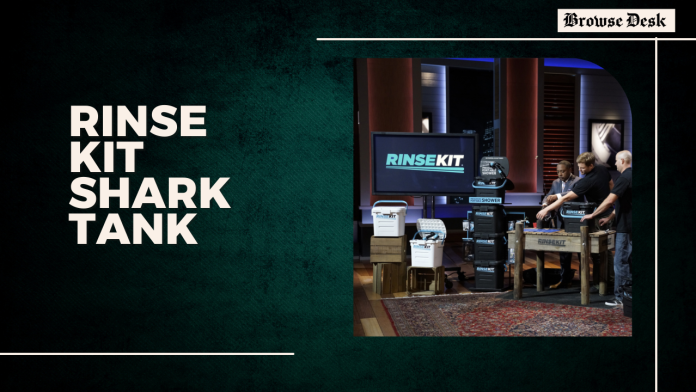 RinseKit is a portable pressure shower designed for people who enjoy being outside. A Rinse Kit provides up to three minutes of pressurized spray to wash away the sand after a long day at the beach without the use of pumps or batteries.

Chris Crawford of California came up with the idea for RinseKit after years of being unable to rinse off sand and salt during early morning surfs. It runs on 2 liters of water for 3 minutes without the use of batteries. The pressurized water may be stored for up to a month and is simple to fill.

RinseKit was created to be a one-stop-shop for all cleaning supplies. RinseKit can be used to clean dishes, countertops, laundry machine parts, tabletops, and just about anything else. RinseKit’s one-of-a-kind design ensures a complete clean every time it’s used.

Who Is the Founder of RinseKit?

Chris Crawford of California came up with the idea for RinseKit after years of being unable to rinse off sand and salt during early morning surfs. He built a PVC prototype in his garage as a 19-year-old in 2003, based on his experience with integrated water systems gained from the pool building industry.

RinseKit was founded in January 2015 and now employs three people, including Crawford. Crawford built the first RinseKit in his garage. After surfing in the morning, he needed something to wipe the sand off his body before heading to work as a swimming pool builder. 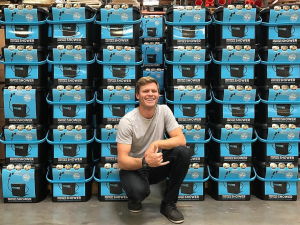 He used his knowledge of water systems to make a portable shower for himself, and when people asked where he obtained it, he “opened the garage” and began selling. RinseKit exploded in popularity in the spring of 2016. In Kickstarter and IndieGoGo campaigns, they raised over $800,000 dollars. The product is now available on Amazon and at major outdoor retailers such as REI.

The device resembles a medium-sized cooler with a sprinkler line attached. Simply fill it with water from your home, and it will conserve the pressure needed to drive the water out when you need it.

They were $89. They’re available in white or black. $99.00 for the model with the hot water bundle. Each RinseKit holds two gallons of water and includes hose and sink adapters. There’s also a field fill kit that uses a bike pump-like device to pressurize the rinse kit when tap water isn’t easily available.

It’s an excellent option for campers, boaters, anglers, or anyone else who gets a little dirty outside and wants to clean up while on the go.

What Happened to Rinse Kit at The Shark Tank Pitch?

After the creation, Chris and Eric decided to propose their concept to Shark Tank in order to raise funding for inventory and increase their awareness in major retail chains. Chris and Eric are looking for $250,000 for 5% of their business, valued at $5 million. Chris describes the portable shower and uses it to wash his hand.

Robert is curious as to why people purchase a RinseKit. Chris claims he created it to clean up after surfing so he wouldn’t damage his car, but he’s found a lot of other uses for it. It appears to be popular among families with children. His experience in the pool industry provided him with knowledge of hydraulics and plumbing, which aided in the development of the gadget.

They will profit $100,000 from these sales. Mark inquires as to why the profit is so low, and Chris responds that it is because they are investing much in marketing. Kevin thinks they’re overpriced because the value is based on projections, but he thinks it’s a fantastic product.

Mark interjects and adds that he wants to see more IT companies, after which he exits. Kevin, on the other hand, is interested and has offered $250,000 in exchange for a 5% stake in the company. Lori wants to know how Chris hopes to get to $20 million in a few years; Chris informs her they are establishing an ecosystem to which they can add additional goods.

Robert adds his two cents. He likes it, but not the risk; despite this, he offers $250,000 for a 20% ownership in the company. Kevin raises his loan offer to $250,000 in exchange for 5% equity shares. Lori rushes in with a $250,000 loan at 5% interest and royalties. Then Daymond comes in with a $250,000 offer in exchange for 7.5 percent equity and sales incentives on companies he brings on to sell the product. Chris accepts the idea right away, and they shake hands with Daymond and make a deal.

What Happened to Rinse Kit After Shark Tank?

The agreement with Daymond was successfully finished, and Chris and Eric celebrated on the pitch. Rinse Kits are sold in over 600 stores around the country, including REI. They also had several sorts and a hot shower that could be plugged into a cigarette lighter in a car. Whether people buy items at a store or on Amazon, the prices are the same.

RinseKit is on its approach to reaching the $20 million mark in sales! The company had $1.8 million in annual sales as of November 2022.