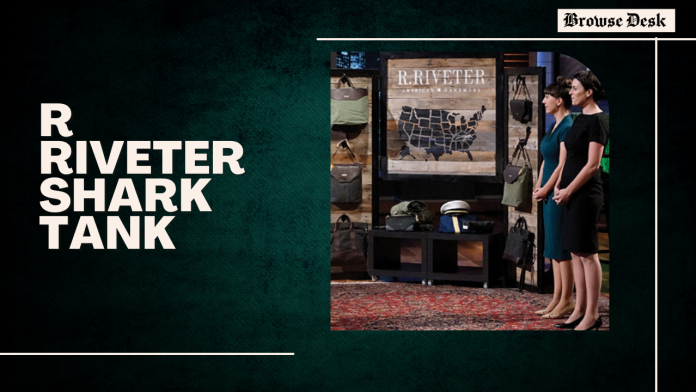 What Is R. Riveter Handbags?

A line of handbags called Riveter was made by military spouses out of repurposed military gear (green canvas, black waxed canvas, USMA wool, brown leather). Each bag has a number on the label that designates a particular military spouse.

Who Are the Founders of R. Riveter?

R. Riveter was established by Lisa Bradley and Cameron Cruse, who became friends in 2011 while their spouses were assigned to Camp Merrill Mountain Range School in Dahlonega, Georgia.

Despite possessing master’s degrees in different fields—Bradley in business and Cruse in architecture—the women struggled to find fulfilling employment. Being married to a military spouse made it difficult for them to settle down for more than two years at a time because their husbands were frequently transferred to different Army locations.

When Bradley and Cruse discovered there was a market for products produced from American canvas and leather, they were inspired by the original Rosie the Riveter. The business was started in Cruse’s attic over her home in the vicinity of Ft. Merrill, Georgia.

They started making R. Riveter bags out of reused army tent canvas, extra uniforms, and leftover blankets using industrial-quality sewing equipment built during the Korean War. Since then, they have used more than ten soldier women to make their bags. To support both their own families and the military aspirations of their husbands, they drop-ship the raw materials wherever they are stationed.

When the couple just exceeded a $35,000 goal with just over $42,000 raised, the Kickstarter community became interested in their tale and donated money. The money was spent on outfitting their “riveters,” or remote workers.

According to Cruse and Bradley’s requirements, each riveter creates the handbags’ component parts at home before sending them to the “home office” in Southern Pines, North Carolina, for final assembly and shipping.

What Happened to R. Riveter at The Shark Tank Pitch?

On Shark Tank Season 7 Episode 16, Cameron and Lisa asked for $100,000 in exchange for a 20% ownership in their business. This translates into a valuation of $500,000. The constant uncertainty that comes with deployment or relocation, they continue, is the hardest part of being a military spouse.

They started their business with the goals of reshaping American manufacturing and empowering military spouses. They tell the story of each one as they distribute sample bags made from used military tents and uniforms.

For instance, Robert’s sample bag was made by 15 people, and each individual who worked on it inscribed their R Riveter number on it. The leather comes from Georgia among other places, while the liners are from New York.

Robert next asked how much the bag cost. Lisa disclosed that it was created for $55 but sold for $220. a huge 300 percent profit margin. They are primarily interested in appealing to military backers. A little more than 60% of their sales are made online, with the remaining 40% coming via their Southern Pines retail location.

They began with $9000 of their own money, and in the past year, they had sold $300,000 worth of goods. Word-of-mouth advertising and press pieces brought them all of their customers.

Kevin questions the cost, but Cameron responds that consumers would be thrilled to purchase products made in the United States, particularly if they were produced by service wives. Given the circumstances, any purchaser who recognized this and supported the neighborhood would cheerfully pay a little bit more.

Since each employee converts to a salesperson by action, Mark refers to them as a social network through action, which he feels is the future of social networks. Daymond thinks they’re right, but he questions why they need a partner. They intend to use the money for straightforward web marketing. They must inform the public about their business and provide the bags with a 90-day lead time.

Daymond thinks it’s problematic when you sell your business to a novice investor for only a third of what it’s worth. He is leaving since he can’t help them. After taking a vacation, Kevin comes back and says he likes it; he offers $100,000 for 20%.

Robert matches it exactly. In addition to making the same offer as Kevin and Robert, Mark additionally offers to finance the company’s inventory. Last but not least, he offered to foot the bill for any more assets or pieces of equipment the business would need in the future.

According to Lori, who is departing, they use a different model than she does. The ladies agree to Mark’s suggestion that they tell the other three bobos to take a stroll when Daymond makes the suggestion. The handshake and hug between the new partners completed the transaction.

What Happened to R. Riveter Handbags After the Shark Pitch?

Once the deal with Mark was finished, R Riveter made an appearance in season 8, episode 816, complete with an update. After appearing on the Tank, Cruse and Bradley’s “Remote Riveter” potential increased from 13 to 31.

At one time, they had an additional 11 Operators working at their retail location. Now there are 21 in total. Their actual space has grown as well. The company now operates out of a separate work and warehouse facility rather than the back of its retail location.

In order to increase production to meet demand following the Shark Tank, they installed five more machines and plan to buy five more in the near future. R.Riveter develops quickly, supporting the American military and rewarding a nationalistic Shark for supporting their goals. They now provide Amazon sales as well.

They planned to open storefronts in Columbus, Ohio, and Southern Pines, North Carolina, as well as two 5,000-square-foot production facilities in Wauchula, Florida, and Columbus. By 2021, they planned to have 80 “Riveters” in total. The company was featured in the section of The Shark Tank Greatest of All Time Special titled “Greatest Businesses with a Social Cause” in February 2020. As of June 2021, they are still in operation and make $2 million annually.

What Is the Net Worth of R. Riveter?

On Shark Tank Season 7 Episode 16, Cameron and Lisa asked for $100,000 in exchange for a 20% ownership in their business. This translates into a valuation of $500,000. It is clear that the current valuation is higher given the company’s expansion.