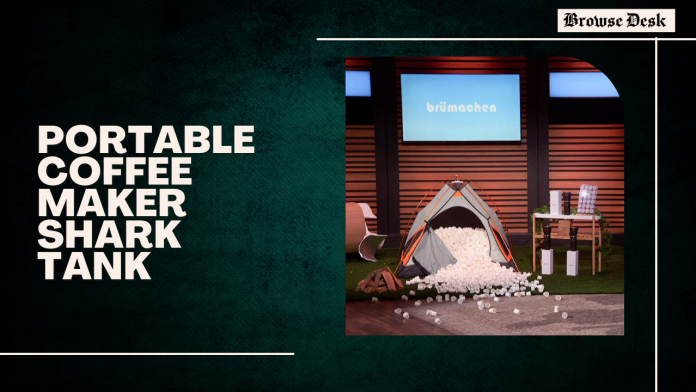 A portable coffee and tea maker called Brumachen is advertised as being convenient to carry and environmentally friendly. The brewer, which can create fresh coffee or tea in just six minutes, is a first-generation, lightweight single-serve maker, according to the website.

A portable coffee and tea maker called Brumachen is advertised as being convenient to carry and environmentally friendly. The brewer, which can create fresh coffee or tea in just six minutes, is a first-generation, lightweight single-serve maker, according to the website. It is quite easy to use; Fill the bottom part with filtered or tap water. (Filtered water is preferred since it prevents the accumulation of silt.)

Dropped into a Pod: An organic Leaf Pod* made by Brumachen or the brewer’s refilling pod for your own preferred brew. These sugarcane-based biodegradable pods are intended to save the planet (as well as landfills) from the 10 billion plastic pods that are thrown away each year and take 400 years to decompose.

K-cups are also compatible with the Brumachen. The following flavors of Leaf Pods are offered: Donut Shop, Morning Blend, French Roast, and Colombia. Connect a power supply to the brewer. Push the switch in. After six minutes, you can unplug the cup and enjoy a fresh brew of 6 ounces.

Who Is the Founder of Brumachen?

Kweku Larbi, an entrepreneur from Ghana, and Ross Smith, an internet celebrity from Indianapolis, Indiana, created Brumachen. The idea for Brumachen came from Kweku. He relocated to the United States from Ghana to pursue his education, and he earned a BS in civil engineering from Cleveland State University.

While working on construction jobs, he would want a cup of coffee, but the closest café was kilometers away. He was certain that a remedy had to exist. So he got to work straight away, coming up with the idea and design, gathering the necessary materials, using a 3D printer to make the prototype, testing the strength and quality of the beverage, and finding a manufacturer in Asia.

With 13 million followers, Ross was swiftly rising to fame on social media. He first gained notoriety by taking pictures of his grandmother and himself in outrageous clothes in outlandish settings.

When he wasn’t building his social media empire—and make no mistake, it is an empire—he developed partnerships with top companies (including the NFL, NBA, and Burger King) and offered them guidance on how to utilize social media tools.

Additionally, he kept an eye out for eCommerce products he liked, and he gave the owners of those products the chance to advertise on his platform in exchange for a cut of the proceeds. In his own words, Ross calls himself “the Mark Cuban of the Internet.” He and Kweku met and became friends in this manner.

The men raised $41,553 through a Kickstarter campaign in January 2020. International fulfillment had some problems, but they seem to be fixed now. The cost of a brand-new device is $121. because they were having trouble collaborating with manufacturers elsewhere.

What Happened to Brumachen at The Shark Tank Pitch?

In Shark Tank season 12 episode 11, Ross and Kweku ask for $1 million in exchange for a 10% interest in their business. This is worth $10 million in total. The Sharks are enamored by Kweku and his story, but they are unhappy with the cost.

The Sharks were baffled as to how Ross’ social media influence could have inflated the company’s worth so high with just $42,000 in revenue from Kickstarter. The Sharks also thought that a lot of design work needed to be done before turning the concept into a marketable product. The Sharks were left without a partnership in play when they chose not to make Brumachen an offer.

Brumachen After the Shark Tank Pitch:

Since the episode first aired, neither the business’s social media pages nor its Kickstarter page has changed. The comments on Kickstarter claim that they will never ship a finished product. KicksIndigoReviews, a “super supporter” on Kickstarter who evaluates IndieGoGo and Kickstarter campaigns, said the following:

People ought to have quit this campaign at the beginning, but I persisted for a dollar to see if I was right, and it turns out that I was. The creators are, regrettably, in well over their heads. People who DID receive a unit and discovered it to be malfunctioning have voiced a number of complaints in the comments. Many customers have expressed their dissatisfaction with the company’s lack of response, and some have even reported the company to Kickstarter. It is unlikely that this product will ever be made.

As of July 2021, their website is still taking orders for the device. International orders, however, are not being fulfilled, which has led to several complaints from that outside of the United States.

In Shark Tank season 12 episode 11, Ross and Kweku ask for $1 million in exchange for a 10% interest in their business. This is worth $10 million in total.