Meagan Monique Good is an actress and model from the United States of America. Prior to obtaining the role of Nina on Nickelodeon’s comedy Cousin Skeeter (1998–2001), she garnered critical acclaim for her performance in the film Eve’s Bayou (1997). After starring in the films Deliver Us from Eva (2003), Roll Bounce (2005), and Stomp the Yard (2007), Good rose to even greater recognition (2007).

In the Los Angeles neighborhood of Panorama City, Good was born. Tyra Wardlow-Doyle, her mother, worked as Good’s manager until she was in her teens, and her father, Leondis “Leon” Good, is a police officer with the Los Angeles Police Department. Her maternal grandmother, according to Good, is an “Afro-Jewish couple. My mother’s father was a mixture of Cherokee and other ethnicities.

My father’s father was from Barbados, and his mother was Puerto Rican and black.” In Canyon Country (now known as Santa Clarita), California, Good was reared with her three siblings. At the age of four, she began performing professionally. Good grew up “very nerdy, incredibly tiny, buckteeth, huge old afro, and yet I had a feeling of confidence about myself, like, ‘they just don’t get it yet,'” according to Good.

In her early adolescence, she was a huge fan of Justin Timberlake and Usher. Good had no role models until she was in her early twenties when she discovered actress Charlize Theron and began admiring her.

Good is a Christian and considers herself a spiritual person, despite the fact that she was not reared in the church. She has stated in several interviews that she refuses jobs that she believes would “disappoint God.” In an interview, she stated that Jesus is her favorite hero and that the Bible was the most recent book she read. As she revealed in a 2004 interview, at the age of 22, Good preferred to focus on her work over relationships.

DeVon Franklin, a Columbia Pictures executive, and Seventh-day Adventist pastor started dating Good in 2011. They married on June 16, 2012, at Triunfo Creek Winery in Malibu, California, after being engaged in early April 2012. Prior to their marriage, the couple claimed to have been faithful in their relationship. After 9 years of marriage, Good and Franklin announced their separation in December 2021.

Status of Their Relationship and Divorce Reason:

According to court documents obtained by The Blast, Meagan Good and her husband, DeVon Franklin, a religious leader, and author, are divorcing. Franklin filed for divorce in the Stanley Mosk Courthouse in Los Angeles on Monday; the pair married in 2012 and do not have children together.

“We have decided to walk into our futures individually but eternally united,” Good, 40, and Franklin, 43, said in a statement to People. We’ve been married for over ten years and share an unbreakable affection. There is no one to blame; we think this is the next best step in our relationship’s progress.” In 2011, the pair met on the production of “Jumping The Broom.” In May 2012, they got engaged, and in June 2012, they married. “We are eternally thankful for the life-altering years we’ve shared as husband and wife.” “We are also grateful to God for the witness that is being built inside both of us, as well as for blessing our life together,” the statement stated.

In 2015, the pair co-wrote “The Wait,” a novel. Franklin states in the book that he had been celibate for ten years before their marriage, whereas Good had been celibate for only one year. “I no longer wanted to be a girlfriend; I wanted a spouse,” the “Harlem” actress told us back in 2016. 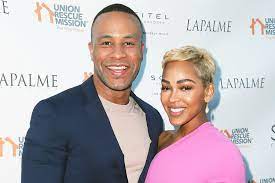 However, she also stated that certain things would never change. “People considered me as a first lady of the church since I was married to a man of ministry,” she explained. “However, I’ve been acting since the age of four, so I’ll never stop wearing seductive gowns on the red carpet.”