A true runway superstar, Lourdes Leon is 25 years old. On Saturday, June 25, the oldest daughter of Madonna, 63, grabbed attention during Paris Fashion Week when she strutted down the catwalk in a skintight catsuit by Marine Serre.

The outfit had a built-in shoe and gloves in addition to the brand’s iconic moon graphic in white against a dramatic black cloth. Lourdes had a dramatic belt, a tonne of stacked bracelets, and lots of gold chains that seemed like they belonged in the 1980s.

Lourdes made her modeling debut in the 2016 Stella McCartney Pop fragrance campaign at the age of just 19. When she was 21 years old, she made her debut on the runway at the Gypsy Sport show during New York Fashion Week. 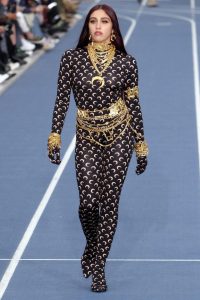 The influencer has maintained her career in fashion, even co-founding the Material Girl clothing label with her mother as a youngster in 2010, but she has also made it clear that she wants to support reforms in the sector. After the Marine Serre performance, Lourdes Leon is pictured with her brother Rocco Ritchie.

In a 2021 chat with Debi Mazar for Interview magazine, she stated, “I want to create a world where models have more choice over what they’re doing and they’re not just silent clothing racks.” Models as personalities and artists—the that’s period we’re entering in the fashion industry, she continued.

Lourdes discussed with Debi the career advice her mother had given her regarding entering the fashion industry. She is very much of the opinion that you should go cautiously and consider your reputation-building goals. As a “model,” you essentially rely on your appearance, so I’ve been thinking a lot about that lately. It can be extremely overwhelming and possibly lead to a great deal of insecurity.

Of course, your appearance will change during the course of your life. My mother is quite persistent in getting me to consider what I want to be recognized for outside of my appearance. I don’t want it to be how people remember me. It isn’t true.

Related Article: After Confirming Their Separation, Katie Thurston and John Hersey Were Sighted Together