There are rumours that Chris Rock and Lake Bell are dating right now.

It’s rumoured that Chris Rock and Lake Bell are dating. Over the Fourth of July holiday in Santa Monica, California, they were seen dining out together on numerous occasions. Both parties reportedly started dating each other a few weeks ago.

Chris Rock has reportedly been working hard to make the new relationship work and is in a “very good head space.” According to reports, the couple has been dating for a few months.

When the pair was photographed on June 13, the former cast member of Saturday Night Live was first connected to actress Lake Bell. On June 13, it happened at a St. Louis Cardinals baseball game in Missouri. The two shared a box seat in the stadium to watch the action, occasionally standing together.

He and the 43-year-old actress were pictured outside of Giorgio Baldi restaurant in Santa Monica over the 4th of July weekend, fueling romance rumours that had already begun to flourish. Rock sported all-white attire and dark dress shoes, while Bell wore a black crop top and high-waisted trousers on Saturday, July 2 event. 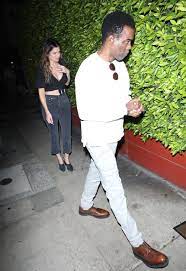 Bell and her spouse Scott Campbell divorced in the fall of 2020, ending their seven-year marriage. Since then, Bell has remained single. The couple split up two months before they publicised their breakup in November of that year. The two children of Lake Bell are son Osgood, 5, and daughter Nova, 7.

On the other side, Chris Rock and Malaak Compton-Rock separated in 2014 after 18 years of marriage. The couple is parents to two kids. Rock is claimed to have put the Oscars incident behind him and is now concentrating on his comedy tour and other planned ventures. After the comedian made a joke about Jada Pinkett-Smith, actor Will Smith slapped him.