Kelly Brianne, an American singer, songwriter, actor, novelist, and TV personality was born on April 24, 1982. She rose to prominence after winning the inaugural season of American Idol in 2002, which led to a record deal with RCA Records. “A Moment Like This,” her debut song, was the best-selling single in the United States in 2002, topping the Billboard Hot 100. Thankful (2003), her debut studio album, landed at number one on the Billboard 200 chart. Clarkson left Idol management and turned to pop-rock for her second studio album, Breakaway, in an attempt to rebuild her image (2004). Breakaway sold over 12 million copies worldwide and won two Grammy Awards, thanks to four US top-ten singles: “Breakaway,” “Since U Been Gone,” “Behind These Hazel Eyes,” and “Because of You.”

The Cause for The Divorce and The Rest of The Story: Kelly Clarkson and her ex-husband, Brandon Blackstock, have allegedly negotiated a divorce settlement. According to TMZ, a judge in Los Angeles Superior Court has approved the conditions of the divorce, which give Clarkson primary custody of the couple’s children and Blackstock financial support.

A post shared by The Kelly Clarkson Show (@kellyclarksonshow)

Clarkson will keep primary custody of the couple’s children, River Rose and Remington Alexander, according to TMZ, while Blackstock will see them once a month while continuing to reside at the Montana ranch which has been a subject of contention in the divorce. Clarkson will keep the ranch in the end, but Blackstock will be permitted to stay until June During his stay at the ranch, he is expected to pay $12,500 in rent every month.

Blackstock, a former talent agent who has stated that he plans to become a full-time rancher, will be paid $115,000 per month in spousal support until January 2024. Clarkson will also pay him $1.3 million as part of the divorce deal, according to TMZ, and he will receive an additional $45,600 per month in child support to offset the bills he’ll spend once he has the kids. If he leaves Montana, the present custody agreement and child support payments might be re-evaluated.

In October of 2013, Blackstock married Clarkson. In June 2020, she requested a divorce.

Settlement of A Divorce: 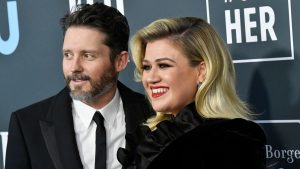 Clarkson was ordered to pay Blackstock $150,000 in spousal support and $45,601 in child support each month until a final divorce settlement was reached in July 2021.

In September 2021, word arrived that both parties had been ruled legally single by a judge in August. Clarkson filed a legal motion in July requesting for her legal identity to be restored and for her to be deemed legally single throughout her divorce.

Clarkson and Blackstock struck an arrangement in January 2022, in which she agreed to give him a little over 5% of the Montana property where he’s been residing since their divorce was announced.

Clarkson requested that her legal name be changed to Kelly Brianne — her first and middle names — in court filings filed on February 14, 2022. That legal filing will be the subject of a hearing on March 28.

Kelly Clarkson is said to have a net worth of $45 million.

During her divorce from Blackstock, court filings showed that Clarkson’s monthly compensation is $1.9 million, which includes earnings from both The Voice and The Kelly Clarkson Show. Meanwhile, according to TMZ, Blackstock only makes a fraction of that, “around $10,000 every month.”