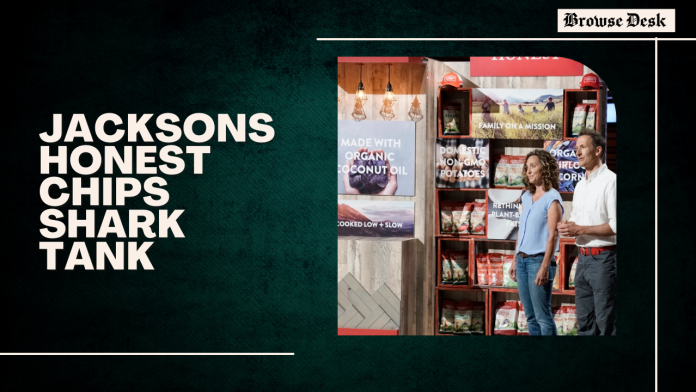 How Does Jackson’s Honest Work?

The coconut oil that Megan and Scott Reamer feel healed their kid with the Aicardi-Goutières syndrome is used in the production of Jackson’s Honest tortilla chips and potato chips along with other real, “honest” ingredients.

The business also uses potato cultivars with a high nutritional value and fry its chips at a low temperature for a prolonged period of time. As a result, coconut oil maintains its molecular integrity. In addition to giving the chip a taste that is more true to its flavor, this also helps shield the chip from potentially hazardous oxidative damage.

Who Is the Founder of Jackson’s Honest?

Jackson’s Honest was founded by Scott and Megan Reamer.

The Honest Jackson Before Shark Tank:

Jackson, the couple’s son, was the inspiration for them to start the business in 2012. Jackson had been exhibiting inexplicable symptoms for twelve years prior to his 2015 diagnosis with the exceedingly rare autoimmune condition known as Aicardi-Goutieres syndrome.

In the end, they started producing their own potato chips and fried them in organic coconut oil, making them a healthier substitute for regular potato chips. The Reamers started selling their homemade chips online in 2012 thanks to encouragement from loved-by-all family and friends. Even though it was difficult to create their brand, their efforts paid off.

Within three months of their release, the chips were in high demand in the United States and a number of other nations. The following year, they updated the business to a modest commercial kitchen, and in 2013, they acquired their first production facility.

They didn’t have to wait long to complete their first purchase from the store Natural Grocers. In less than a year, they were successful in selling chips valued at more than one million dollars. In order to achieve its goal of generating $10 million in sales, the company ultimately hired a small group of workers.

They began collaborating with other well-known merchants as their business grew and became more successful, including Sprouts and Whole Foods. Finally, Scott made the decision to focus exclusively on this project in June 2017 and left his day job.

The company’s founders eventually succeeded in landing a spot on the reality series Shark Tank, which is shown on ABC, with their goal of growing it even further. The episode was aired on television as part of the two-hour season premiere on October 1, 2017. Jackson tragically passed away suddenly on August 13, 2017, a short time after the recording was finished; he was only 50 years old.

Despite the fact that baked chips are her favorite, Lori Greiner decided not to invest in Jackson’s Honest. She is now outside. Mark Cuban is worried that the profit margins won’t increase quickly enough for him to see a profit on his investment. He’s also gone.

The grocery sector, according to Barbara Corcoran, is infamous for consuming other industries whole. She is not prepared to contribute to Jackson’s Honest as a result. Despite the fact that Rohan Oza thinks the project was finished superbly, he is worried about the valuation.

Although Rohan Oza believes they did a fantastic job, he is worried about the valuation. He is prepared to make them an offer and believes the value he adds will support it. He proposed a $1.25 million investment in exchange for a 20% interest in Jackson’s Honest. Megan and Scott weren’t ready to part with such a big portion of the business. They responded by offering $1.25 million in exchange for a 7.5 percent ownership in Jackson’s Honest. Rohan Oza talked about his experiences growing Pop Chips from $4 million to $80 million in three years.

Final Agreement: Rohan Oza agreed to put up $1.25 million in exchange for 15% of Jackson’s Honest.

Jackson, the Reamers’ son, tragically lost his fight with his disease a few short months after the episode was recorded. His family has remained dedicated to carrying on his work, and they continue to devote time, effort, and resources to the company. When they were featured on the show, the company’s founders claim they received a deluge of calls, reviews, and emails from prospective customers. The support of their investor, Rohan Oza, has also allowed them to improve in a number of other ways. There are several different components to the process, including packaging, strategy, branding, marketing, and funding.

Among the numerous goods that Jackson’s Honest has lately released is a new line of grain-free puffs. Cheddar cheesy, spicy cheddar, and sweet potato crunchy are the three flavors of the gluten-free snack now offered.

They don’t include any maize, rice, or vegetable oil, but they are just as healthy as the other chips in their line. They can be purchased, along with the company’s other goods, online via its website or from retailers spread across the nation.

The company has received more compliments during the past year than it did the year before. Most of their potato chips on Amazon have reviews of four stars or above. The majority of customers seem to be happy with the snack, according to a closer examination of the evaluations, while some have complained that the price may be too expensive. On the organization’s official Facebook page, which you can view here, a comparable rating is also noted.

After the performance, the contract between Rohan Oza and Jackson’s Honest was signed. Following its participation on Shark Tank, Jackson’s Honest’s sales experienced a tremendous increase. In order to distribute Jackson’s Honest, Megan and Scott took use of their exposure and even secured arrangements with other distributors.

In 2018, Jackson’s Honest introduced grain-free puffs at the same time as the business changed its name to Jackson’s-the Super Snack. By May 2022, Jackson’s Honest will be sold in every Whole Foods location and will have annual revenue of more than $6 million.

Yes, as of May 2022, Jackson’s Honest was still operating, bringing in $6 million annually.

How Much Money Is Jackson’s Honest Worth?