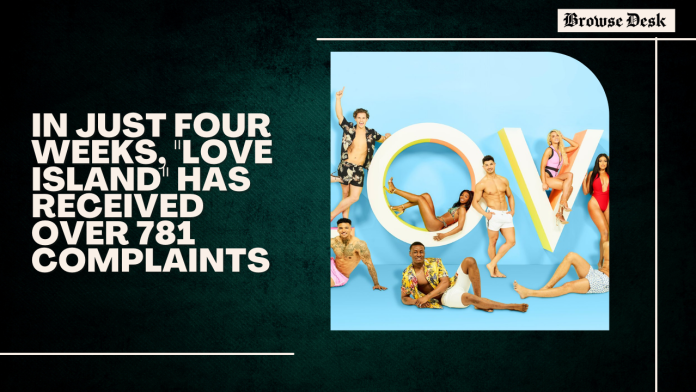 Given that the show has received over 781 complaints in only four weeks, the current season of Love Island UK, which is broadcast on Hulu in the United States, is creating quite a summer storm.

Since the eighth season’s June 6 premiere, the British media watchdog Ofcom has received hundreds of complaints, according to Variety. According to a spokeswoman for Ofcom, “So far, we have received a total of 781 complaints regarding the current season of Love Island.” Concerns about bullying on the show, the welfare and mental health of the competitors, the age difference between contestants, and the fact that some contestants get more screen time than others are just a few of the issues that have been made.

On social media, some viewers had previously voiced their displeasure with competitor Gemma Owen, who was a major focus of the program early in the season. One spectator tweeted about the screen-stealing candidate, the daughter of former England soccer star Michael Owen, saying, “Can’t lie it’s becoming the Gemma show.”

Gemma, 19, and Davide Sanclimenti, 27, were partnered up previously in the dating competition, which pairs contestants for a variety of sexy challenges. Later, the two “re-coupled,” and Gemma is now dating Luca Bish, age 23.

This is not the first time the well-liked reality series has drawn criticism. After a heated exchange between candidates Teddy Soares and Faye Winter on one program last season, there were approximately 25,000 complaints received. Winter was the subject of the majority of criticisms; she later expressed regret for her actions.

In recent years, controversy has surrounded Love Island UK due to the psychological harm the show and associated media attention have caused. After Caroline Flack, the former host of the program, and two past contestants committed suicide within a three-year period, many people questioned the program’s obligation to its participants.

Always at Each Other’s Side’: Sharon and Ozzy Osbourne Celebrate Their 40th Wedding Anniversary