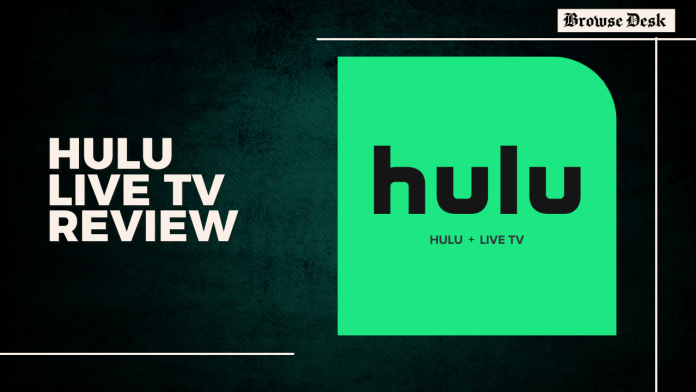 Hulu is one of the most popular on-demand streaming services on the market, with over 45 million subscribers and some of the best original programming on any streaming platform. It has a good selection of live TV channels and movies, as well as a vast library of on-demand content. Hulu is a no-brainer for cable-cutters to enjoy their favorite TV, with popular series from networks like ABC, Fox, and NBC that you can watch soon after they air. This Hulu live TV review can assist you in determining whether or not the service is good for you and which package to purchase.

Hulu’s basic ad-supported service costs $7 per month or $70 per year, giving it a more affordable option than HBO Max ($10 per month) and Netflix ($10 per month). College students can also get a $2 per month discount on the platform until they graduate.

This low-cost Hulu subscription gives you access to all of Hulu’s on-demand programming, including Hulu original programs such as “The Handmaid’s Tale” and “Nine Perfect Strangers,” as well as current TV shows such as “Atlanta” and classic sitcoms such as “I Love Lucy.” You’ll find a wide range of entertainment in the on-demand library, which has over 3,000 films. You will, however, have to go through some advertisements at the beginning and finish of each episode because this plan is ad-supported.

Hulu will be available on all of your favorite iOS and Android devices, allowing you to take it with you everywhere you go. On your lunch break, catch the latest episode of “The Resident,” or watch your favorite sitcoms from wherever you choose. You’ll also get a 7-day free trial (similar to Apple TV and YouTube TV) to try out Hulu content before committing (available for non-Live TV plans). What’s the biggest disadvantage? You’ll be limited to only two simultaneous streams regardless of which Hulu subscription option you choose.

The ad-free version of Hulu’s basic plan costs $13 per month and includes no commercials. You’ll get unrestricted access to Hulu’s entire library of on-demand entertainment, free of advertising. It also features offline downloading, so you can watch your favorite shows and movies while you’re not connected to the internet. This means you can watch a movie before a flight or plan a long road trip without using up your data. If you’re not sure if it’s worth the money, a 7-day free trial of the Hulu (No Ads) plan is available.

One of the most popular live TV streaming services is Hulu + Live TV. The ad-supported version of this live tv streaming service costs $70 a month and includes over 75 live TV channels as well as access to Hulu’s on-demand library. This Hulu Live subscription also includes Disney Plus and ESPN Plus at no additional cost.

Hulu, on the other hand, isn’t simply for watching movies. The ability to watch live baseball, football, and basketball on ESPN can be quite beneficial to sports lovers. Depending on your location, you’ll also get a few local networks like CBS, ABC, NBC, and FOX, as well as limitless enhanced cloud DVR storage so you don’t miss a thing.

Hulu (No Ads) + Live TV costs $76 per month and includes access to Hulu’s on-demand library of over 3,000 titles, 75+ live TV channels, Disney Plus, ESPN Plus, and unlimited DVR storage. While advertisements will continue to air on live TV channels, all on-demand programming on Hulu will be ad-free, reducing distractions and allowing you to concentrate, regardless of which streaming device you use.

This Hulu + Live TV plan is Hulu’s most comprehensive bundle, offering you access to everything the three platforms have to offer for one low fee, including 75+ live channels, 15,000 on-demand movies, and ESPN Plus access to live games and daily sports talk shows. So, whether you’re seeking the best entertainment, kids’ programming, local channel availability, news, and sports without commercials, this package has everything.

Contents
1. Which Hulu Add-Ons Are Available?
2. Is There Any Sports Material on Hulu?
3. How Does Hulu Stack up Against the Competition?
4. What Are Some of Hulu’s Drawbacks?
5. What Distinguishes Hulu from The Competition?
6. How Do I Get Rid of My Hulu Subscription?
7. Is Hulu Worth the Money?

Which Hulu Add-Ons Are Available? Is There Any Sports Material on Hulu?

One of the main draws of Hulu + Live TV is sports. Channels such as Big Ten Network, ESPN, Golf Channel, CBS, TNT, and NBC Sports Network offer a diverse selection of national and regional sports. You can watch and record live games from the NFL, NBA, MLB, NHL, and more with the Hulu Live TV package, whether you’re at home or on the go with the Hulu app.

While not as extensive as FuboTV, the streaming service still has a good selection of sports channels and now includes ESPN Plus as part of a Hulu + Live TV subscription. Thousands of live college games, live boxing, MMA, golf, tennis, cricket, lacrosse, and rugby matches are available with ESPN Plus. You’ll also have access to the whole 30 for 30 library as well as daily sports talk shows. Overall, Hulu + Live TV is one of the greatest options for die-hard sports lovers to watch all of their favorite games, from large games to niche sports like fencing or rallycross.

How Does Hulu Stack up Against the Competition?

When it comes to Live TV services, though, Hulu is more expensive. Competition like Sling TV is definitely more reasonable, with its most costly subscription costing only $50 per month for the ad-supported version at $69.99 per month.

Despite being one of the more expensive options on the market, Hulu has a lot to offer. Users can add up to six accounts to a single subscription, have unlimited DVR storage, and complete freedom, including the ability to stream Hulu from iOS and Android mobile devices, comparable to YouTube TV and Philo. This live TV streaming service is a complete alternative that provides you access to your favorite content, and it has one of the most extensive sports channel lineups (second only to FuboTV).

What Are Some of Hulu’s Drawbacks?

Although Hulu keeps up with newer TV shows, older shows sometimes suffer from missing seasons or episodes. With this in mind, it can be difficult to revisit previous favorites that have been canceled or discontinued due to the platform’s “rolling” availability. Larger families are limited to what they can view at the same time with only two simultaneous streams, regardless of the plan they choose. If you want to watch on more than two screens at once, FuboTV, which has ten simultaneous streams, maybe a better option, followed by Disney Plus, which has four.

What Distinguishes Hulu from The Competition?

Hulu features a large selection of older TV shows and movies that are difficult to come by elsewhere. Because of the changing availability, you may come across incomplete series from time to time, but it’s a terrific way to catch up on the classics when they’re accessible. While Netflix streams new seasons of TV series up to a year after they debut, Hulu frequently streams new episodes barely 24 hours after they air on live television. Hulu is the ideal streaming service for cord-cutters who still want to watch their favorite TV series.

If you don’t opt-out before your first billing date, Hulu will automatically charge you for a recurring membership.

How Do I Get Rid of My Hulu Subscription?

Is Hulu Worth the Money?

This Hulu review should have helped you decide whether or not the service is good for you. It’s one of the most comprehensive cord-cutting replacement services, allowing cord-cutters to view their favorite shows, movies, and even live TV channels without paying the expensive cable TV prices.

While it isn’t the cheapest streaming service or live television subscription on the market, it does include a respectable channel roster, a choice of video quality options, offline downloads (with no-ad plans), and a large selection of on-demand episodes and original movies. You’ll also get access to practically every live game or program you can think of if you combine your membership with Disney Plus or ESPN Plus, providing you with unlimited enjoyment. The most difficult decision you’ll have to make is which show to watch initially.