A company called Golfkicks offers cleat kits that turn sneakers into golf shoes. Due to the exorbitant cost, discomfort, and unattractiveness of golf shoes, the company’s founder decided to start it.

Golfkicks offered a kit that turns common sneakers into top-notch golf shoes as a solution. Golfkicks was created by CEO Tyler Stuart. Before starting this business, Stuart was an entrepreneur. He created the Sushi Roll, a container for conveniently storing rolled-up fly fishing flies.

He developed the Handle, a social media plugin that enables Twitter and Instagram feeds to be displayed on websites. Handle transforms social media posts into content assets that are suitable for publication.

Who Is the Founder of Golfkicks? 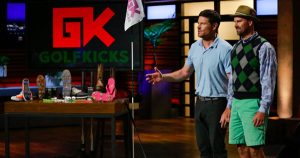 The business was started by Golfkicks’ CEO, Tyler Stuart. The two men are “good to deadly” golfers who play with a third partner by the name of Matt Mockus. On the golf course, people desire the freedom to wear whatever shoes they want, but spiked shoes are necessary. So they produced them.

In essence, goal kicks are screw-in cleats that fit any shoe with a rubber sole that is at least 1/3 inch thick. Simply use a 5/32 drill bit to create a 1/4-inch deep hole on the flat portion of the shoe, and then screw on your Golf Kicks cleat. They must be screwed in straight or they won’t hold.

Following a $1,610 IndieGoGo campaign in the summer of 2018, they successfully launched their company in early 2019 with a Kickstarter campaign that raised $15,147. They still have a shop in Denver where a “traction kit” is available for $29 there. Twenty cleats, a Sharpie (for marking pilot holes), a Philips screwdriver, and a 5/32 drill bit are all included in each set.

What Happened to Golfkicks at Shark Tank Pitch?

In Shark Tank episode 1103 Tyler Stuart and John Krosky ask a shark for help with their Golfkicks, golf spikes that can be attached to any shoe or sneaker. Since they are still a young company, they are searching for a Shark to help them develop and mentor them along the road.

Tyler and John asked for $300,000 in exchange for an 8% interest in their $3.75 million company when they appeared on Shark Tank. They offer samples and give forth product demonstrations. The Sharks are happy with their financial results: they made $120,000 over the past three months and anticipate making over $1 million this year.

To increase their online and offline sales on Amazon and in golf pro shops, they are asking for a Shark’s help. Lori, who likes to play golf, proposes a $300,000 loan at an interest rate of 8% along with a $2 per unit royalty until she recovers the $300,000 PLUS she wants a 5% ownership stake in the company.

What Happened to Golfkicks After Shark Tank?

The agreement with Mark never came to fruition. The company is now running and successfully selling on Amazon. After the first broadcast of the performance, they rapidly ran out of merchandise.

As of January 2022, the corporation was still operating and was bringing in $4 million annually.

In the pitch, the company was valued at $3.75 million. Since then, the company has continued to operate, therefore its net worth may be bigger than pitch.