What Is Geek Chic?

Geek Chic is a company that specializes in creating unique gaming furniture. The cherry, maple, and walnut tabletops pull off to expose bespoke insets made for each buyer. For their maps, risk players usually order a sheet of acrylic glass. With a speed cloth, poker players can deal more swiftly. 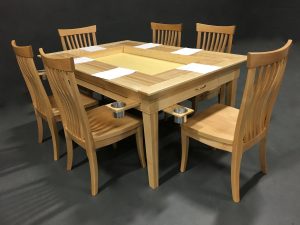 Robert Gifford is the company’s CEO. In Everett, Washington, he creates Geek Chic furniture for the discriminating gamer/geek who values practicality as much as aesthetics. The gaming tables from Geek Chic may be completely tailored to the customer’s gaming tastes and aesthetic.

Geek Chic can construct a gaming table for you, whether you prefer a relaxing game of cards, role-playing game war simulations, or something in between. Gifford is a 40-year veteran role-playing player who chose to make a career out of his nerdy hobby.

What Happens to Geek Chic at The Shark Tank Pitch?

Geek Chic is introduced to the Shark Tank in Season 4 Episode 25 by Robert Gifford. He’s looking for a $100,000 investment in exchange for a 5% ownership in his $2 million company.

Gifford defines a “geek” as someone who is very curious about a particular topic. He talks about how his hobbies contributed to his house being cluttered. Gifford shows off one of his tables, which doubles as a dining room table and can also be used for games.

The Sharks are ecstatic with the quality and presentation of his furniture, but the figures leave them scratching their heads. In the first year, sales were $2 million, but the bottom line was not so good. Geek Chic was in the red for $100,000.

Gifford plans to use the money to enhance his production and shipping capabilities. Lori Greiner admires Geek Chic but has reservations about his capacity to flourish in the competitive furniture business. She’s made it out alive.

“Furniture is not my strong suit,” Mark Cuban says. He merely sees a table and has no interest in working in that industry. He’s made it out. Robert Herjavec is a furniture enthusiast, but not a business strategist. He’s already gone.

Kevin O’Leary tells Gifford that he is an “anomaly” in the furniture industry since he has gotten this far. He believes that he should keep his company small and avoid large-scale sales. He’s already gone. Daymond John is undecided about investing, but he is enamored with the furnishings and Gifford’s management style.

He makes a $200,000 offer in return for a quarter-share of the company. Gifford responds with a $500,000 offer for a 15% share in the business. Daymond John retains his post despite his displeasure. Robert Herjavec unexpectedly reappears in the fray, this time with a new monetary offer.

He’s offering $300,000 in return for a quarter-share of the company. Gifford accepts Herjavec’s offer and walks out from the Tank with a Shark deal.

After the Shark Tank Pitch, It’s All About the Geek Chic:

Robert’s deal never went through. Due diligence allows both parties to reject an offer, and Gifford ultimately chose to accept a more favorable offer from a Geek Chic investor. The company is still growing, but cash flow remains a problem.

For the time being, Gifford’s strategy of gradual growth and low prices is working, but if the Geek Chic company is to continue, he will need to start earning a profit. Gifford is unwavering in his determination to achieve his goals.

The company, however, did not make it. On June 13, 2017, the company announced that it was shutting down. The business filed for bankruptcy the next month, having $7.5 million in debts and only $1.4 million in assets.

Robert Gifford comes in looking for a $100,000 investment in return for a 5% ownership in his $2 million firms. He accepted Robert’s offer of $300,000 in exchange for a quarter-share, bringing the total price to $1.2 million.