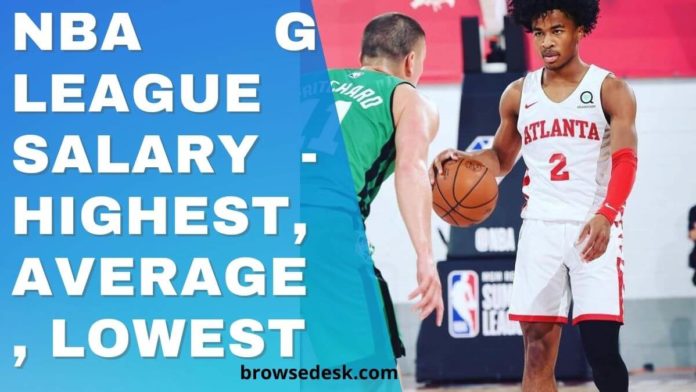 The National Basketball Association (NBA) is one of the most well-known and watched sports leagues in America. The NBA G League, or NBA D-league, is a developmental basketball league for players who are not yet signed to an NBA team. There are currently 26 teams in the league with each team consisting of 10 players on their roster. Their salaries range from $19K-$35K per year depending on how much time they spend playing in the league during a season. Since it’s not as popular as other professional sports leagues like MLB and NFL, there isn’t much information about these player’s salaries readily available online so we created this blog post to give you some insight into what salary ranges you could expect if you were looking at.

The G League is the official minor league franchise of the NBA, which serves as a place for lesser-known basketball players to develop their skills. The MBA Development League was formed in 2001-2002 and has developed and evolved into what it is today.

It allows young and experienced players alike to hone their abilities for the league’s top guns.

The NBA G League is a training ground for the NBA for coaches, players, and other staff. It’s also used by officials, trainers, and other employees as a coaching system in the NBA. There are 29 G League franchises, each representing a relationship with an NBA team except for the Ignite squad, which is associated with the NBA G League.

The G League does not have individual team contracts, instead it uses a league-based system. Players on the team are paid according to a format that we’ll go through in further detail below.

Salary Scale of The G League

The compensation of G League players is determined by their contract and the category to which they belong. The following are the four categories:

This category includes players who sign a “select contract” that is worth around $125,000 on average. This contract is for those who are considered to be among the greatest in terms of talent and skill.

When the season is in effect, athletes earn base pay for five months, which does not include additional incentives like call-up compensation.

In recent years, this new special contract has been mostly for talent that do not go to college but choose to play in the G League instead.

This category applies to basketball players with three years of experience or more who are sent to the G League affiliate team for a period of time. Perhaps it’s because of rehabilitation, leisure, training, or making a roster space.

This player’s contract is with an NBA franchise, and the league may move him as needed. On the other hand, players on an NBA assignment get paid their usual NBA salary.

Like the National Basketball Association, the G League drafts players who are under 18 years of age and have been drafted. The G League Draft is a stage where future NBA players are selected. These players have yet to declare for the NBA draft.

Once the G League takes them, the NBA is unable to recall them during the season, so they must remain in the G League until the season is completed. The top-earning players in the Challenger Series make approximately $7000 monthly, for a total of $35,000 throughout the five-month season.

NBA training camps generally conclude in October, and that is when NBA teams select up to four individuals they want on their G League clubs.

Players in this category might earn up to $50,000 through some of the partial guarantees offered at the NBA training camp.

A player’s NBA team can waive him, which allows them to assign or categorize him with their G League affiliate in order to use him as an in-season affiliate player.

During the season, each NBA team has a maximum of four affiliated players at any one time. This limit only applies to those who participated in training camp before the beginning of the running season.

A Quick Summary of the Key Categories and their Salaries

When gamers combine their NBA playing time, two-way contracts, and other incentives in their contract, they may earn up to $400,000 per season.

What Is The Average G League Salary?

The G League pay scales are based on your class and how you joined the G league. The average G League salary, on the other hand, is expected to be $35,000. However, with a combination of contracts or on the same level they are, some gamers could make far more than this.

What Is The Highest G League Salary?

Sharife Cooper, a guard with the Texas Legends, leads all G League players in terms of compensation. He earned $462,629 over the course of the season. He is on a two-way contract with the NBA’s Atlanta Hawks and the College Park Skyhawks of the G League.

He was chosen in the third round, 48th overall, on July 29th. During his only season with Auburn, he played just 12 games before a left ankle ailment ended his campaign prematurely. However, his brief stay for the Tigers was remarkable, as he averaged 20.2 PPG, 8.1 APG and 4.3 RPG in 33.1 minutes per game.

He will not be on the Atlanta Hawks’ 15-man regular season roster. He’ll take the two-way slots, making him eligible to play in up to 50 NBA games.

The highest-paid player in the G League last season was Jalen Green, who earned $500,000. He is a shooting guard for the NBA G League’s Ignite. He was ranked the top shooting guard in his 2020 class by ESPN, and he is a consensus five-star prospect.

He had already been offered scholarships by several NCAA Division I basketball programs in Florida State, USC, and Arizona when he was just 15 years old.

What Is The Lowest G League Salary?

The Minimum salary for a player in the G League’s D-League is $7000 per month. The $50,000 Player’s Allowance is the basic amount in the G League Drafted Players Basic Contract. This payment also includes other perks like housing and insurance for the five months the league is in operation.

There is no predetermined cap for the number of players that an NBA G League team can sign to a select contract, and the league is typically open to players who aren’t eligible for the NBA. In addition, these amounts could vary considerably based on the player’s negotiating abilities and their worth to the team.

Despite the fact that they are not allowed to play in the NBA because they did not go through a draft, these players are paid on a scale.

The most well-compensated players in the G League are generally the best or most sought after in their respective categories coming out of high school. Some other gamers, on the other hand, combine contracts to obtain higher advantages that may quickly improve their take-home.