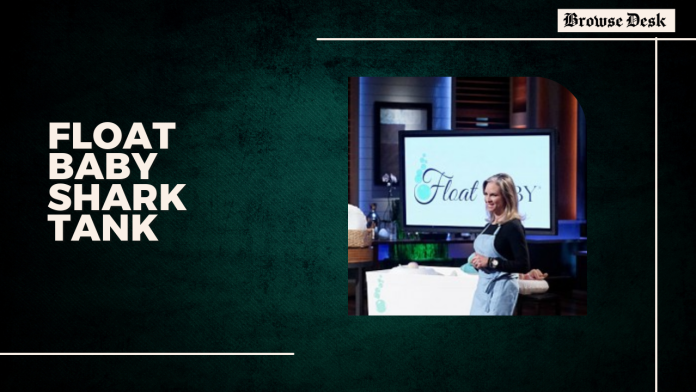 What Is Float Baby?

Float Baby is a baby spa in Houston, Texas. Infants as young as two weeks old can wear a donut-shaped flotation device around their necks and float in warm water. 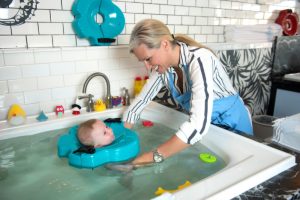 Warm water floating is said to improve strength, lung capacity, digestion, and circulation, among other things. Customers with infants can also get newborn massages from experts like owner Kristi Ison.

According to Kristi, seven other countries backed up the Griffith University of Australia’s therapy and float technology study, which looked at 7,000 youngsters under the age of five and found that toddlers who floated were 50% more likely to hit their watermarks.

Who Is the Founder of Float Baby?

Kristi Ison developed and runs Float Baby in Houston, Texas, in 2013. The Float Baby experience revolves around the groundbreaking ring, which suspends infants in the water as they float and splash alongside mom or dad.

The infants are given a warm towel and massage after the 20-30 minute splash session! The newborns gain from enhanced bone strength, a strengthened respiratory system, better blood flow to the heart, and improved cognitive development by floating in their own sterilized tubs.

Numerous studies have demonstrated the advantages of giving your newborn water. For the best overall benefit, Ison feels that newborns should attend a weekly class. Individual courses cost $160, while group classes are $50. Only Houston is currently offering Float Baby.

What Happened to Float Baby at Shark Tank Pitch? 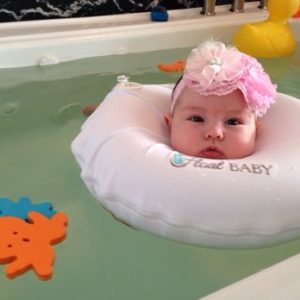 On Shark Tank episode 721, Kristi Ison, a Certified Instructor of Infant Massage, pitches Float Baby, her “spa” for newborns aged two weeks to eight months. Ison is on the lookout for a Shark to help her grow into new territories.

Kristi’s Shark Tank pitch was for $150,000 in exchange for a 20% ownership in her company, which was valued at $750,000. Weekly exercise promotes physical and cognitive strength, and regular massage boosts blood flow, she explains.

She was the first to provide newborns with both exercise and massage. When the Sharks saw infants floating in pools wearing the Float Baby rings, they burst out laughing. “Who wants to float with infants instead of swimming with sharks?” Kristi is curious.

Mark is intrigued by the source of her claims. According to Kristi, Australia undertook the largest study on early water programs, which revealed that babies who participated in these programs grew and developed 50% faster than non-participants.

Who was the first to put a hemorrhoid cushion around a baby’s neck, Daymond wonders? According to sources, the idea came from Japan. Floats rings are made by a number of companies, and she owns a patent on the ring cover. A one-hour session at Float Bay costs $65, and it’s a retail business with three tubs.

Mr. Wonderful claims that it isn’t proprietary, and that “Mr. Wonderful Float-a-tron” might be released tomorrow. Kristi will need money to buy bigger tubs. She made $44,000 her first year and was on track to make $65,000 the next year.

Sacca exclaims that he doesn’t understand what makes her so special, and he walks out. Daymond has ruled her out because he feels she is incapable of forming a tribe on her own. Barbara quits because she feels she lacks energy/hustle and needs a salesperson/business partner.

Kevin acknowledges that he believes in the virtues, but says she should sell the doughnut since no one cares about a baby spa. Kevin tells her that “this is not the advice tank; he’s out,” so she considers selling the rings and tubs.

She says in the hallway that she will continue to do so. When Daymond returns to the Tank, he asks to see the video again, which they all do, laughing. Kristi walked away from the pitch without an agreement.

After Shark Tank, What Happened to Float Baby?

Kristi continues to provide float treatments at her Houston spa despite her disappointing performance on The Tank. The Facebook page is still up and running, and she’s advocating a $5 per session price hike while still selling gift cards at the current pricing of $55 per session or $198 for a group session with four infants.

Despite the fact that her business does not appear to be thriving, she does have a small but loyal local following. Even if Float Baby never grows large enough to swim with the Sharks, her popularity in the local market may be enough to keep it floating.

It was a great concept with a lot of potentials, but her vision did not connect with the Sharks’ long-term goals of home and retail sales, so she’ll stick with the small fish for now. The company is still in operation as of January 2022, with annual revenue of nearly $900,000.

During and after the pitch, the firm was valued at $750,000. Since then, the corporation has remained in operation till January 2022. The company’s net worth might be greater than the pitch’s.