What Exactly Is Fling Golf? 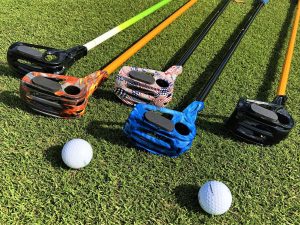 Flingstick is a golf club that looks like a standard golf club but features a small, rigid lacrosse basket instead of a club head. Alex Van Alen, the CEO of Fling Golf, started the company. FlingGolf is an athletic, natural, and enjoyable alternative to traditional golf.

Instead of striking a ball with a club, the company’s website suggests tossing it with the New Swarm Flingstick thrower to get it closer to the hole. FlingGolf sticks come in a number of sizes and types, as well as different patterns.

Although FlingGolf is currently available on a few select courses, the sticks are exclusively available on the company’s website, with wholesalers able to purchase in bulk. Beginning in the summer of 2021, rental packs will also be offered. 12 FlingSticks, regulations, and scorecards are included in the packages, as well as pre-paid return postage. The 12 sticks are available for hire for $200.

According to the episode synopsis, “two entrepreneurs from Ipswitch, Massachusetts, believe they’ve filled a void with their natural and entertaining alternative to a classic sport.” Fling Golf, a mix of lacrosse and golf that may be played on current golf courses across the world, was proposed by Alex Van Alen and John Pruellage.

Alex Van Allen and John Pruellage demanded $300,000 in return for 10% ownership of their firm on Shark Tank Season 12 Episode 24. That means they valued their company’s worth at roughly $3 million. The Sharks were skeptical on “Shark Tank” season 12, episode 24, and Kevin O’Leary feels the “golf gods” will not be happy.

“We don’t give a damn!” they exclaim. They accepted Daniel Lubetzky’s offer of $300,000 for 25% of Fling Golf after some haggling. The price was lowered to 1.2 million dollars.

Who Are the Founders?

FlingGolf was founded by Alex Van Alen, who also serves as the CEO. Alen was on a mission to make 35,000 golf courses throughout the world more active and exciting, according to his bio on the FlingGolf website, and FlingGolf proved to be the ideal way to do this. In order to accomplish so, he created New Swarm Sports. 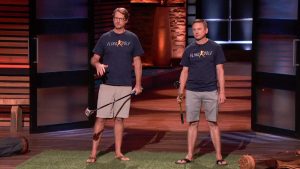 Prior to this, Van Alen had a diverse career. He was formerly the CEO of the Essex County Trail Association, which aimed to bring “sled dog racing back to Massachusetts in a big way” as well as build popular jogging, kayaking, horseback riding, and mountain biking event. Van Alen developed a prototype for the FlingStick in 2012 after coming up with the concept of FlingGolf as a child.

In an interview with WCVB, he noted, “You just need that one stick to go on the course.” “It’s wonderful, in my opinion. It’s an excellent technique to introduce the game to younger players. The equipment is one factor. You are just buying one club for the cost of the equipment “He went on to say, He also discussed his experience on the Shark Tank. “Waiting for the doors to open was insane, a lot of excitement,” Van Alen continued. “It was just a lot of fun,” said the participant.

Where Is Fling Golf Now?

Fling Golf Has Done Extremely Well Since Its Launch, with Over 1,200 Golf Courses in 27 Countries Having Been Added to The Game. Fling Golf Grew at A Breakneck Pace from 2014 to 2019, with 160 New Courses Opening per Year. Every Year, the Brand Brings in Roughly $50,000 in Net Income.

Ben Stiller Divorce After 18 Years of Marriage? Is that True or Just a Rumor!