Elite season 5 may have just premiered, but Netflix has already confirmed that the show will return for a sixth season.

Since the first season of Elite premiered in 2018, audiences all around the world have been captivated by the teen drama. It portrays the fictional narrative of Las Encinas, a prominent school in Madrid where money, murder, and mayhem rule the lives of its students. The unexpected climax of Elite season 5 has fans clamoring for more of the teen drama.

As of yet, none of the Elite cast members have confirmed whether Season 5 will be their final season. That being said, Itzan Escamilla (Samuel), Omar Ayuso (Omar), Claudia Salas (Rebeka), and Georgina Amorós (Cayetana) all appear to be moving on. Benjamn strikes Samuel and busts his head open at the end of Season 6. It’s unclear whether Samuel dies or survives.

Whatever the outcome, it appears that Samuel, Omar, Rebe, and Caye are ready to depart Las Encinas. We believe they will come in Season 6 to wrap up their stories. Carla Daz (Ari), Martina Cariddi (Menca), Manu Rios (Patrick), Pol Granch (Phillipe), Valentina Zenere (Isadora), and André Lamoglia (Iván) are also expected to return.

Ander Puig will be the show’s first trans main character.

Netflix announced in October 2021, “Big news: Elite has been renewed for Season 6!” Following that, the international streaming service added: “In addition, three more Short Stories will be released in December: Phillipe, Caye, and Felipe on December 15th Samuel and Omar on December 20th Patrick was born on December 23rd.” The short stories have now all been broadcast, as has season 5, however, season 6 is still on the way. 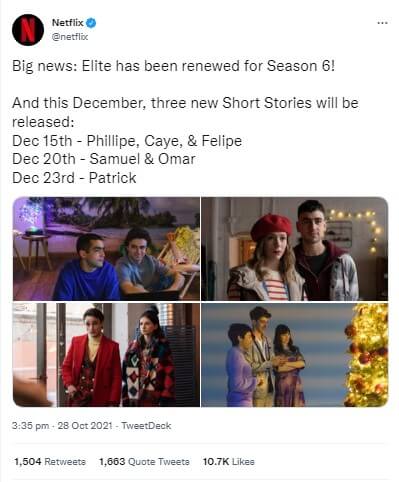 There is no information on the Elite season 6 narrative as of yet, although it is probable that it will pick up after Benjamn goes to jail and Samuel either survives or dies from his attack. If Samu, Omar, Rebe, and Caye leave, we believe Patrick, Menca, Ari, Isadora, Iván, and Phillipe will take centre stage in season 6, with new drama involving the new characters.

It remains to be seen whether Patrick and Iván will be able to date after working through their issues (including Patrick’s crush on Iván’s father). Whatever occurs, it appears that the kids of Las Encincas will be entangled in yet another major mystery.

There is currently no Elite season 6 trailer available, but we will notify you as soon as one becomes available.