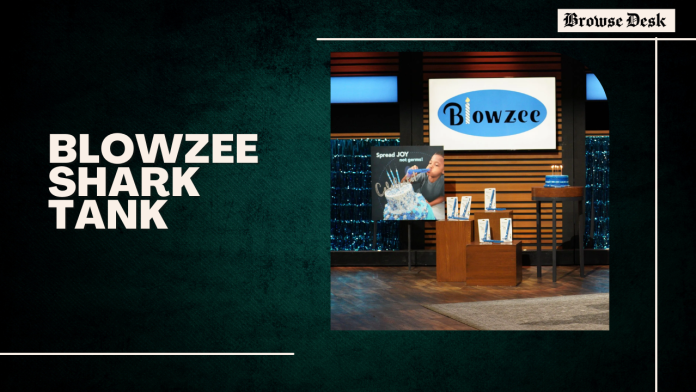 In “Shark Tank” season 13 episode 13, Mark Apelt asked the Sharks to invest in his Blowzee invention. Since the beginning of time, we have been concerned that blowing out birthday candles may result in spitting on the cake. Blowzee makes a unique design that enables users to blow out candles without worrying about spittle in an effort to address this problem. Let’s delve deeper into the product’s details and chart its development.

Contents
1. Who Are They and What Do They Do, Blowzee?
2. What’s Become of Blowzee?
3. What Happened to Blowzee on The Shark Tank?

Who Are They and What Do They Do, Blowzee?

Interestingly, Mark Apelt isn’t Blowzee’s only founder; the company also has a second silent partner who prefers to stay out of the public eye. Mark, a resident of Richmond and a graduate of the University of Virginia, frequently accompanied his son Jake to birthday celebrations. While it was customary for the birthday child to blow out the candles on their cake at each party, one such event appalled Mark and the other parents because they could clearly see the child spitting on the cake’s icing.

Because Mark is highly particular about hygiene, the experience made him reflect. As a result, after the party, he gathered other parents and communicated his concerns. Even though most people agreed with his viewpoint, Mark soon came to the conclusion that there were no items on the market that could address the issue of manually blowing candles. He quickly came up with a prototype idea but realized that since birthday cakes are the only food items that receive this treatment, the product would not be successful in the market.

But as the COVID-19 pandemic swept the globe, Mark discovered himself cooped up at home with plenty of free time. Additionally, the pandemic had made people more concerned about hygiene, so finding a different way to burn candles seemed like a good idea. As a result, Mark and another father from Richmond collaborated to develop the idea for Blowzee. But it took Mark and his partner a long time and a lot of effort to arrive at the final product since they had to try out various designs and prototypes before they found one that worked.

The actual shape of a Blowzee is that of a tube with a fan on one end and a hole for blowing air into the other. When someone blows into the gadget, the air triggers an internal sensor, which causes the fan to spin and, in turn, efficiently extinguishes the candle. However, all of the contaminated air is turned around and directed back at the user, leaving the cake spit-free. Despite the fact that Blowzees utilize lithium batteries and cannot be put in a dishwasher, they can be readily cleaned and reused without running the risk of contracting an illness.

After Mark Apelt and his silent partner had finished perfecting the Blowzee design, they uploaded it to the Upwork freelance network. To their amazement, a Michigan-based engineer who was inspired by the idea created a functional version of it. Furthermore, the co-founders believed that China would be their only option for manufacturing Blowzees because no other nation had the sensor they need. Mark was surprised by the response when the finished product was released to the market and hundreds of individuals decided to utilize it at their birthday parties.

The product was also highlighted in the New York Post, which increased interest in it. The co-founders soon realized that in order to keep up with demand, they would have to boost production. The item was also highlighted on programs and publications like “The Tonight Show Starring Jimmy Fallon,” “Elvis Duran and the Morning Show,” “NPR’s Morning Edition,” and “The Daily Mail” as a result of its popularity.

The cost of each Blowzee, which includes a battery, is $11.99. Even though the delivery fee is $1.99, it is waived if more than 4 units of the product are being purchased. Mark partnered with a couple of Richmond bakeries in an effort to increase their consumer base, and the businesses now offer the product. However, for those who enjoy buying online, the cutting-edge product is available on their website or at the world’s largest online retailer, Amazon. Additionally, the product will undoubtedly have even greater success in the future given Mark’s current efforts to get Blowzee on the shelves of other significant grocery chains.

What Happened to Blowzee on The Shark Tank?

Mark and Mark apply to the Shark Tank and ask for $100,000 in exchange for 20% of their business. When one of the Marks asks, “Who wants a slice?” after blowing out the candles on the moist cake they provided, the Sharks are horrified. They claim that they have always found blowing out cake candles to be disgusting. According to science, this causes a 1400 percent increase in cake-borne bacteria. On a different cake, they do the blowzee. Sharks appear amused.

The Sharks give their Blowzees a trial and declare them to be cool. Daymond longs for the days when he had one. They describe their inspiration for creating it. A utility patent was submitted. The price is $6 for wholesale, $11.99 for retail, and $3.20 for freight. They sold 12,000 pieces in 5 months and made $20,000 as a result. The Sharks object to the statistics. The Marks claim to be poor marketers.

Although Robert loves it, he is curious as to if there are any other products in the works. They claim that licensing offers the possibility of customization. The majority of their sales are made online, and PR is used to market it. Kevin says he despises this and is leaving. Shark Tank, according to Mark, is all about the two Marks. He exits by saying that they are a corporation, not a product. Daymond says he’s out because it’s uninvestable. Robert promises to buy one once before leaving. Although she is also out, Lori thinks the product is smart.