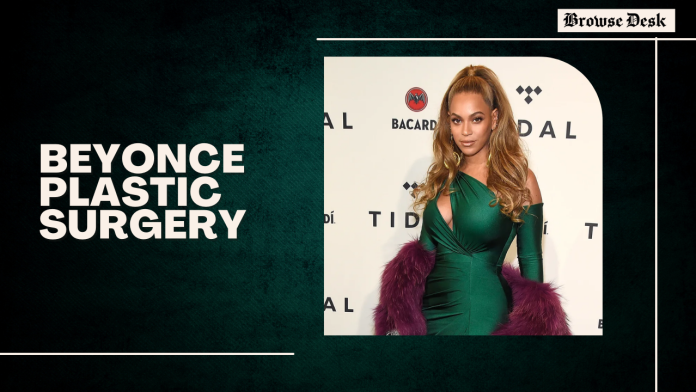 Beyoncé does all in her power to keep her private life private. However, it hasn’t prevented the general public from looking for any information they can on her. People frequently wonder if Beyoncé has undergone plastic surgery.

Dr Daniel Barrett, a plastic surgeon, used TikTok to share his professional insight with viewers. In his video, he contrasts images of Beyoncé taken in the past and the present to highlight alterations in her appearance and any possible cosmetic surgeries the diva may have undergone to achieve those changes.

Has Beyoncé Had Plastic Surgery?

Beyoncé has never made a formal statement about any cosmetic operations she may have undergone. She seems to have lost a lot of weight from her earlier days in the spotlight. Fans have therefore conjectured that she may have undergone liposuction, a butt-lift, and at least facial fillers.

However, many think that Beyoncé’s two pregnancies, particularly the one in which she had twins, are to blame for the alterations in her appearance. Blue Ivy, born in 2012, and the twins Rumi and Sir, born in 2017, are the couple’s three children.

The general public started to believe she underwent plastic surgery after her most recent pregnancy. However, a lot of fans remarked that the singer of “Halo” already had enough curves thanks to having twins.

Dr Daniel Barrett, a Beverly Hills cosmetic surgeon, weighs in on whether Beyoncé has undergone plastic surgery in a TikTok video. He begins by comparing two images of Beyoncé’s face, saying it appears as though she underwent rhinoplasty to slim out her nose.

The doctor explains in the TikTok video that “there’s no way you can get from this [before] to this [after] without a rhinoplasty.” He also concurs with many who have noticed that she may also have facial dermal fillers.

Additionally, Barrett has a strong suspicion that Beyoncé had breast augmentation. He remarks on how rounded her breasts appear and claims that such a form wouldn’t occur naturally. However, she is obviously dressed up for an event in the picture he uses, so perhaps tape was used to produce the desired impression.

Barrett examines her physique one last time and claims that many of her fans believe she has undergone liposuction or a Brazilian butt lift. He claims that, in his professional judgement, he cannot determine with certainty if she has undergone cosmetic treatments in those areas. She might have changed as a result of her most recent pregnancy or her vegan diet. She is being scrutinised because of the superstar’s fame.

Beyoncé’s Cosmetic Surgery, Including a Nose Job and Breast Augmentation:

Beyoncé Ingrid Knowles People Are Naturally Interested in Carter’s Every Action Because She Has One of The Biggest Fan Bases Among Her Prominent Colleagues. She Rose to Fame After Joining Destiny’s Child. the Music Group, Which Also Features Kelly Rowland and Michelle Williams, Made Its Official Debut in 1997 and Followed that Up with The Release of A Self-Titled Debut Album in 1998.

With Their Second Album, the Writing’s on The Wall, with Hits Like “say My Name” and “jumpin’ Jumpin’,” Destiny’s Child Gained Enormous Popularity in 1999. the Trio Was Unstoppable After That. Destiny’s Child Received a Star on The Hollywood Walk of Fame, Received Three Grammy Nominations out Of a Possible Fourteen, and Performed During the 2013 Super Bowl Halftime Show (after Officially Disbanding in 2006).

Dangerously in Love, Beyoncé’s First Studio Album Was Released in 2003. the Album’s Opening Track Was Her Smash Song “crazy in Love,” and The Singer Quickly Rose to Fame. in Addition to Winning 26 MTV Video Music Awards, She Has Recorded Six Solo Albums and Received 70 Grammy Nominations, Which Is a Record for A Woman in The History of The Award.

Because of Her Fame, Beyoncé’s Figure Has Been Scrutinised by Those Enamoured with Celebrity Beauty. as Long as She Continues to Be a Public Figure, that Scrutiny Will Exist.