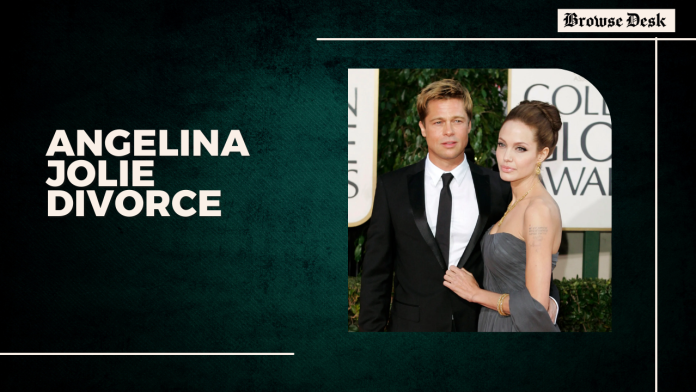 Angelina Jolie is one of the most famous actresses in the world. Angelina Jolie (born DCMG) is a Hollywood actress. Angelina Jolie Pitt (born June 4, 1975) is an American actress, filmmaker, and philanthropist. She has been called Hollywood’s highest-paid actress countless times and has won numerous awards, including an Academy Award and three Golden Globe Awards.

Contents
1. Angelina Jolie’s and Brad Pitt’s Marriage Status:
2. Shock Split:
3. Divorce in The Spotlight:
4. Disagreement Over Child Support:
5. A Friendly Agreement:
6. Battle for Custody:
7. What Is in The Best Interests of The Children?
8. Angie Discusses Her Experiences with Trauma:

Jolie was accused of instigating the divorce of stars Brad Pitt and Jennifer Aniston in October 2005, resulting in a well-publicized Hollywood controversy. She admitted to falling in love with Pitt while filming Mr. & Mrs. Smith (2005) but denied having an affair with him, stating, “I couldn’t forgive myself for being involved with a married guy when my own father had cheated on my mother. If I did that, I wouldn’t be able to look in the mirror in the morning. I wouldn’t be interested in a man who cheated on his wife.”

The pair was called “Brangelina”—a portmanteau developed by the entertainment media—and were the subject of international media coverage during their twelve-year romance. They went on to become one of Hollywood’s most affluent couples. Before they announced their engagement in April 2012, their family had grown to include six children, three of whom were adopted. The pair divorced on September 15, 2016, after two years of marriage. Jolie filed for divorce on September 19, claiming irreconcilable differences. On April 12, 2019, their divorce was completed.

Angelina Jolie and Brad Pitt’s divorce is on pace to be the most acrimonious and expensive in history. The long-running legal fight, which began in 2016, has seen the ex-couple trade insults in divorce court, costing them millions of dollars in legal bills. Pitt, 57, and Jolie, 46, began dating in 2005, married in 2014 and divorced two years later in 2016.

Their divorce was finalized in 2019, but the custody battle and financial asset dispute are still ongoing. In a new complaint, Pitt called Jolie “vindictive” for allegedly attempting to shut him out of an agreement to sell her portion of their $226 million home in France.

After More than A Decade Together and Two Years Married, Jolie and Pitt Divorced in 2016, Apparently out Of Nowhere. In the Divorce Papers, the Actress Claimed “irreconcilable Disagreements” and Asked for Sole Physical Custody of Their Six Children.

Since Then, Their Divorce Has Been Tumultuous, with The Couple Being Locked in A Heated Custody Battle Over Five of Their Six Children: Pax, 17, Zahara, 16, Shiloh, 15, and Twins Vivienne and Knox, 13 Years Old. Maddox Is Now 20 Years Old. Since Their Breakup in September 2016, the Human Rights Campaigner Has Been Fighting Pitt in Court.

Divorce in The Spotlight:

Pitt’s Request for An Emergency Hearing to Seal All Records Relating to His Custody Dispute Was Refused in December 2016. The Fight Club Star Filed the Application to Seal the Records “because He Wants to Keep This Custody Struggle out Of the Public Eye to Protect His Children,” a Source Told Et at The Time.

According to Another Person Close to Jolie, the Actress Was Not Attempting to Make Brad Appear Bad. Angelina Jolie’s Team Isn’t Opposed to The Records Being Sealed, According to A Source at The Time. “There Have Been Several Allegations that Angelina Jolie Wants These Documents to Remain Public in Order to Make Brad Appear Terrible. that Is Untrue. Their Custody Arrangement Was Already Legally Enforceable, According to The Paperwork. “The Only Reason to Formally File It with The Court Would Be to Enforce the Agreement Because One of The Parties Was Attempting to Modify It, Which Is Exactly What Was Going On.” “brad Was Seeking to Establish His Own Routine with The Kids,” the Person Added. “he Was Not Relying on Medical Specialists’ Opinion as To What Should Be Done.” It Was Necessary to Have the Custody Agreement Reaffirmed in Court in Order to Keep Everything in Line. as A Result, Angelina’s Side Was Compelled to File It in Court.”

In January 2017, Their Relationship Appeared to Be Improving when They Released Their First Joint Statement on The Proceedings and Agreed to Keep Court Papers Secret. “the Parties and Their Counsel Have Signed Agreements to Protect Their Children’s and Family’s Privacy Rights by Keeping All Court Documents Confidential and Engaging a Private Judge to Make Any Necessary Legal Decisions and Expedite the Resolution of Any Remaining Issues,” According to The Statement. “The Parents Have Pledged to Work Together to Achieve Rehabilitation and Reunion.”

Then, in August 2018, Jolie Accused Pitt of Not Paying “substantial” Child Support for A Year and A Half. According to A Court Document, Jolie Intends to Seek a Court Order Requiring Him to Pay the Money. Pitt’s Lawyer Reacted by Disputing that He Had Not Paid Significant Child Support and Claiming that He Had Given Jolie More than $12.45 Million Since Their September 2016 Divorce.

Pitt Said, “petitioner’s Request Is Superfluous, Omits Key Facts, and Is a Thinly Veiled Attempt to Control Media Attention.” Jolie’s Attorneys Also Claimed that The Actor’s Accusations in Court Filings that He Hasn’t Paid Enough Child Support Were “designed to Escalate the Conflict,” According to His Lawyers. Around the Same Time, Jolie Pleaded with A Judge to Finalise Her Divorce from Pitt and Reinstate Her Status as A Single Woman.

A Source Stated Jolie and Pitt Had Been Working on Their Co-Parenting Relationship Around the Two-Year Anniversary of Their Breakup. An Insider Told Et, “brad and Angelina Really Planned up A Private Rendezvous at Her Place.” “This Is the First Time They’ve Genuinely Come Together to Make Things Work Since Their Children’s Group Therapy.” the Meeting Between Brad and Angie Went Well. They’ll Stick to The Strategy that The Courts Have Laid Forth.”

“Angelina Felt It Was Time to Make Things Work, and Brad Was Relieved and Eager to Accept the Offer,” the Person Claimed. “throughout the Process, Brad Has Been Devoted to Achieving Peace, and It Appears that They Have Now Arrived at A Stage Where They Can Establish a Calmer Setting for The Kids.” Despite the fact that The Pair Split in 2019, the Custody Fight Continues, with Pitt Requesting More Time with His Children. Pitt Was Given Shared Custody of The Couple’s Children in May, a Decision that Jolie Has Promised to Appeal. Three of Their Children, According to The Salt Actress, Wanted to Testify Against Pitt but Were Prevented by Judge John Ouderkirk.

“Angelina Believes It’s Really Vital that The Kids’ Emotions About Who They Want to Essentially Spend Time with Are Heard,” a Source Told Us Weekly. “she’s Not Making the Kids Testify.” She Has Followed the Recommendations of The Children’s Therapists. She Is Hoping That, in The Future, the Children Will Be Allowed to Testify in Front of An Objective and Fair Court.”

Judge Ouderkirk Is a Private Judge Who the Couple Chose to Keep Their Divorce Facts Confidential at First. He Is Said to Have Performed Their Wedding in 2014. A California Appeals Court Eventually Dismissed Judge Ouderkirk for Allegedly Failing to Adequately Disclose Information Regarding Pitt’s Counsel.

The Lower Courts Apparently Found in Jolie’s Favour, Removing Judge Ouderkirk from The Custody Case and Dismissing His Verdict. Pitt’s Lawyers Contended that Judge Ouderkirk’s Error Was Minimal and Hence Not Worth Overturning His Custody Decision. According to The Attorneys, the Actress Was Searching for Any Justification to Have the Judge Removed from The Case.

“We Are Seeking Review in The California Supreme Court Because the Temporary Judge, Who Had Been Appointed and Repeatedly Renewed by Both Sides, Was Improperly Disqualified After Providing a Detailed, Fact-Based Custodial Decision After a Lengthy Legal Process with Multiple Witnesses and Experts,” Pitt’s Lawyers Said in A Statement.

What Is in The Best Interests of The Children? “judge Ouderkirk’s Ethical Breach, when Considered in Conjunction with The Information Disclosed Concerning His Recent Professional Relationships with Pitt’s Counsel, Could Reasonably Cause an Objective Person, Aware of All the Facts, to Entertain Doubt as To the Judge’s Ability to Be Impartial,” the Court Ruled in July. According to The Associated Press, “disqualification Is Necessary.”

“the Appeals Court Ruling Was Based on A Technical Procedural Problem,” a Pitt Representative Told the Sun After the Court’s Decision. the Facts Have Remained the Same. “the Court – and The Numerous Specialists Who Testified – Reached a Clear Decision About What Is in The Best Interests of The Children Based on An Unusual Quantity of Factual Data.” We’ll Keep Doing What’s Legally Required Based on The Comprehensive Conclusions of What’s Best for The Kids.”

Angie Discusses Her Experiences with Trauma:

Jolie Said Her Tragic Experiences Had Left Her “broken” in An Emotional Interview with The Uk’s Guardian Last Month. “I Mean, in Some Respects, It’s Been the Last Decade,” She Told the Tabloid, Referring to Her Pain that Has Lasted Longer than The Five Years Since Her Separation with Pitt. “there’s a Lot I’m Not Allowed to Say.”

“I Think at The End of The Day, Even if You and A Few People You Love Are the Only Ones Who Know the Reality of Your Life, What You Fight For, What You Sacrifice, or What You’ve Experienced, You Learn to Be at Peace with That, Regardless of What’s Going on Around You,” She Continued. The High-Profile Exes, Called Brangelina in The Past, Have Already Spent Millions of Dollars on Their High-profile custody fight.