Amber Heard is an actress, model, and activist from the United States who has made more news for her difficult divorce from Johnny Depp than for her films. She is most known for her roles as warrior princess Mera in the DC Universe blockbusters “Justice League” and “Aquaman,” but she is currently in court, where she is being sued for $50 million for slander and libel against her ex.

According to Celebrity Net Worth, Heard has an estimated net worth of $8 million. Before filing a restraining order, Amber Heard demanded that Johnny Depp pays for her Range Rover, LA apartment, and cough up 125k. As Amber Heard’s $100 million divorce battle with ex-husband Johnny Depp heated up, the actress’ divorce demands were exposed to the jury.

Heard was given $7 million in her divorce settlement, which she said would be split between two charities: the Children’s Hospital of Los Angeles and the American Civil Liberties Union (ACLU).

Depp’s former divorce attorney Laura Wasser was the final witness for the day on Wednesday. The music mogul, who has collaborated with everyone from Dr. Dre to Angelina Jolie, was asked about their breakup.

After a Year of Marriage, Heard Filed for Divorce in May 2016: She requested spousal support, saying they had not signed a prenuptial agreement. Depp’s mother died two days before the petition was filed. Heard filed for a restraining order against her then-husband a few days later, alleging she had been the victim of domestic abuse on many occasions. The judge eventually signed an interim order, but insiders close to Depp dismissed the petition as nonsense.

Wasser said that her lawyer had faxed along with a letter with requests from Depp before Heard filed for the restraining order. Samantha Spector, the Aquaman actress’ attorney, issued the letter accusing Depp of physically assaulting Heard on May 21, 2016, at their condominium in Downtown Los Angeles.

“There are multiple witnesses to this specific event, and there are images proving both the property damage Johnny perpetrated and the bodily injuries he inflicted on Amber,” she alleged. “Unfortunately, this is not Johnny’s first episode of domestic violence against Amber,” Spector added. She said there had been two other occurrences in the previous six months.

Her client was scared of Depp, according to Spector, but she wanted to keep the situation hidden. Heard’s team stated that they did not intend to serve legal paperwork to Depp during one of his film premieres. “Amber desires to move rapidly toward a quiet and peaceful conclusion of all concerns,” the lawyer said. “To do so, she will require Johnny’s urgent participation.” 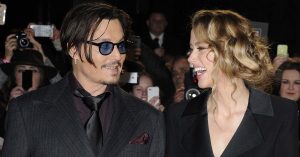 Heard then asked that he sign divorce papers and agree to her requests. She asked him to let her drive the black Range Rover she had in her hands and pay for it. She also requested exclusive use and custody of three condos in Depp’s Downtown Los Angeles skyscraper. He was also expected to pay the expenses, according to the actress. To keep matters ‘out of the media limelight,’ Amber Heard asked that Johnny Depp grant her use of their residences, a Range Rover, and $125,000 in cash as part of their divorce. A letter presented during Johnny Depp’s defamation trial revealed Amber Heard’s divorce demands.

In a 2016 letter, she requests a Range Rover and the ability to stay in their residences rent-free to keep matters “out of the media glare.”
Depp is suing Heard for defamation, claiming she lied in an op-ed about being mistreated.

In exchange for keeping their increasingly tumultuous divorce “out of the media limelight,” Amber Heard asked that Johnny Depp allow her to live rent-free in their apartments while he continued to pay the mortgage and utilities. That’s according to a letter presented in court as evidence in the continuing defamation case on Wednesday.

Heard’s lawyer Samantha Spector wrote to Depp’s lawyer Laura Wasser in 2016 after Heard filed for divorce from the “Pirates” actor, demanding $125,000 in attorney’s fees and the “exclusive use and custody” of a black Range Rover for which Depp would continue to pay. As Wasser testified about the specifics of the divorce, the letter was admitted into evidence.

“Although Amber is terrified of Johnny, she insists that we do all we can to keep this personal problem out of the media limelight,” the letter added, before pointing out that Heard hadn’t applied for a restraining order publicly at the time. Heard’s attorneys noted that her wish to keep matters quiet is also “why we did not arrange for Johnny to have been personally served at last night’s movie premiere.”

At the time of their split, Depp was promoting “Alice in Wonderland.” “We are definitely hoping that we can quickly work out mutually acceptable short and long-term solutions away from the public glare,” the letter said, listing Heard’s requests.

Depp is suing Heard for defamation, saying that she lied in a 2018 Washington Post op-ed about being a victim of domestic abuse. He believes the piece implied he was the offender, and the Oscar winner claims the editorial cost him job possibilities. Over the course of four days, Depp testified in court about their rocky relationship and break-up.

Heard has disputed the charges and accused Depp of abusing her, and her lawsuit is set to begin next week. According to Edward White, Depp’s business manager, who testified on Thursday, that by the time the divorce was finalized in early 2017, Depp owed more than $14 million. According to White, the figure includes $7 million given to Heard, as well as $500,000 for her attorneys, taxes, and other expenditures related to their jointly held assets.

Heard said the $7 million would be shared between the ACLU and a children’s hospital. However, an ACLU executive testified this week that the organization only received $1.3 million of the promised $3.5 million in her name, with $500,000 of that coming from Elon Musk, who Heard dated after her separation with Depp.